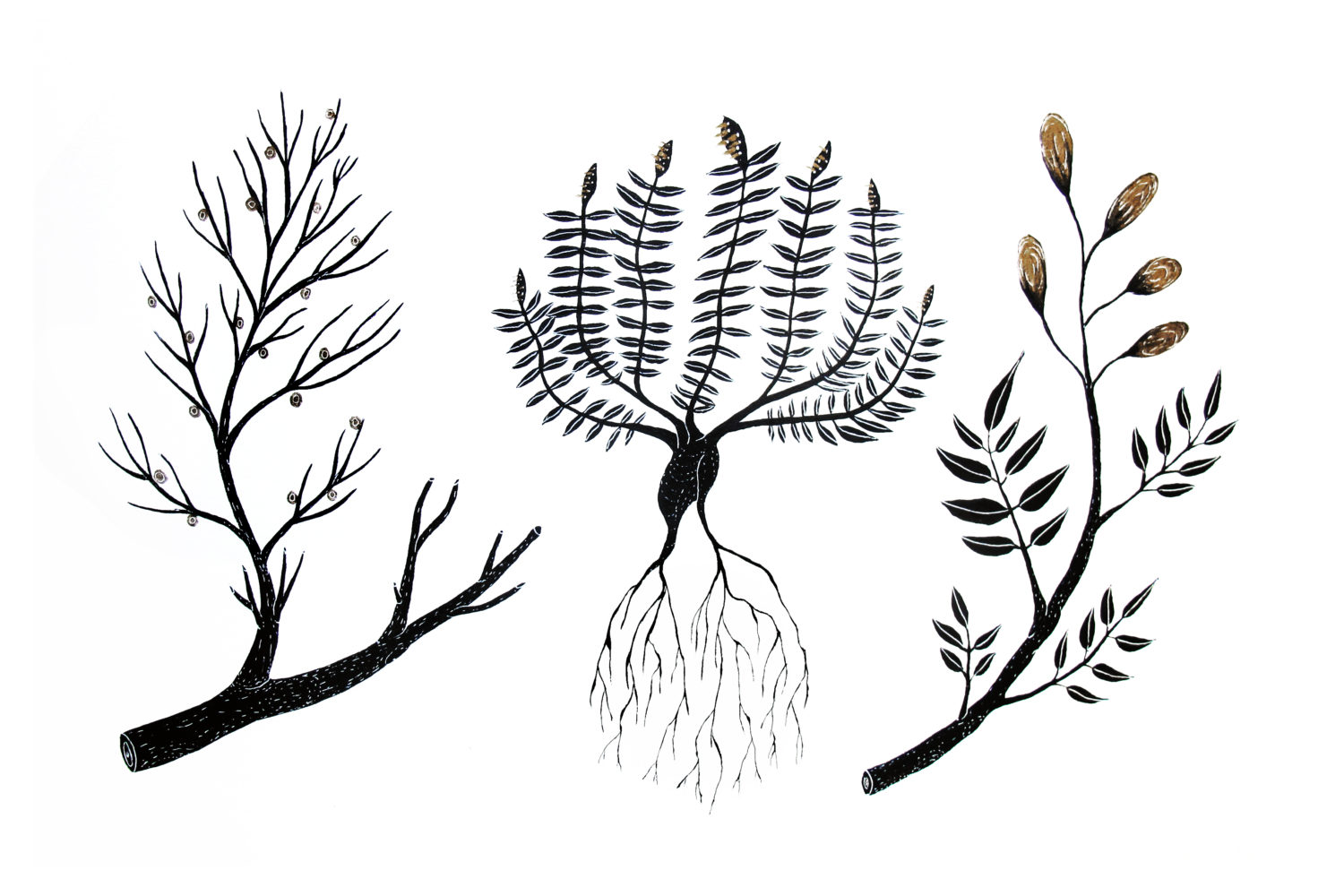 FROM ANCIENT HERBARIES TO PHYTOTECHNOLOGIES:

WITH THE PLANTAE PROJECT

REFLECTORS ON THE ROLE OF PLANTS IN HUMAN HISTORY

Cultural and educational initiatives in Rome from 8 to 26 May

Hemp and poplar for the treatment of soils contaminated by heavy metals, sunflower as a phyto-remedy in the remediation of uranium and radionuclides, acacia to enrich the soil and increase its ability to degrade organic contaminants, swamp straws for wastewater treatment. Plants are a powerful remedy against air pollution, water and soil contamination. The ancients had understood this and the Egyptians already considered the water of the Nile collected downstream of the rivers rich in vegetation to be more suitable for drinking. Plants have been observed, collected, used, classified and studied by man since the dawn of history. And today they continue to unveil their properties and find new applications, from phyto-remedies to green infrastructures and nature based solutions, solutions for the sustainable management of resources based on natural processes, used to make cities more resilient to climate change.

Plants as a determining element for the quality of human life are at the center of PLANTAE, a project conceived by the Climate Art Project association, which will be in Rome from 8 to 26 May, with the aim of shining the spotlight, indeed the lens of enlargement, on the plant world, as an element of dialogue between human history and the environment. The initiative is part of “Eureka! Rome 2018 “, the event dedicated to scientific dissemination and promotion promoted by Roma Capitale Department of Cultural Growth and in collaboration with Siae.

The central appointment will be De Herbis, an exhibition organized at the Angelica Library in Rome (from 18 to 26 May) in which precious herbaria and ancient collections of plants are accompanied and revived by the drawings and sculptures of Andreco, a pioneer of artistic experimentation in the scientific field. and ecological.

The exhibition, curated by the art historian Sara Alberani, will make accessible to the public ancient volumes on botany such as the Erbari di Gherardo Cibo, dating back to the end of the sixteenth century, the Hortus Sanitatis of 1491, a collection of woodcuts on the vegetable kingdom, mineral and animal, and the Hortus Romanus, a 1772 work by Giorgio Bonelli on the plants of the Botanical Garden of Rome. These invaluable manuals will be combined with the works of Andreco, a visual artist and environmental engineer, in a visual rereading of the plants contained in the volumes and in dialectic with the work of the ancient naturalists. 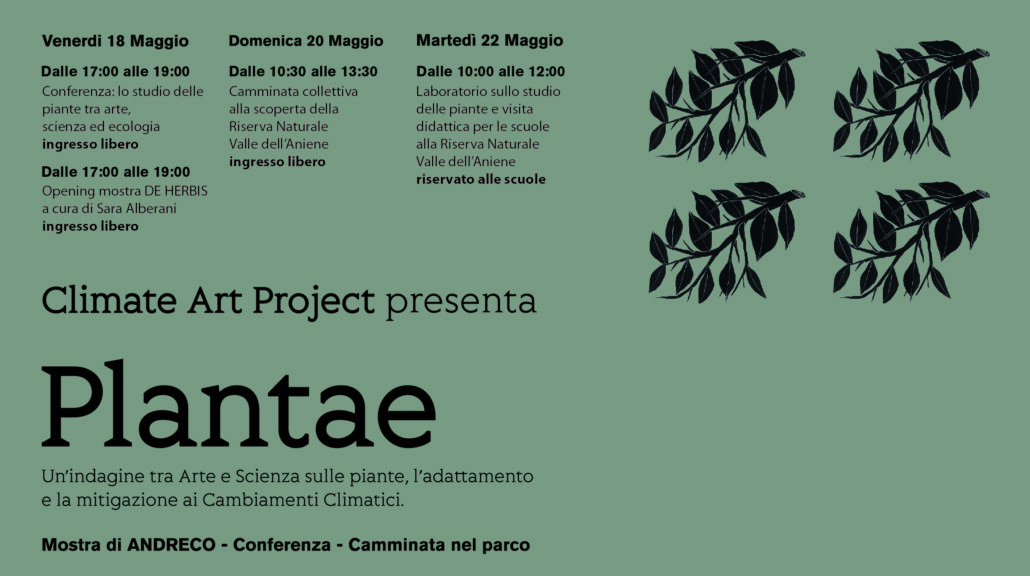 “PLANTAE – declared Andreco, artist and founder of Climate Art Project – wants to create a dialogue between art and science, history and the environment, but also between citizens and experts, on the role of plants in relation to the presence of man in the territory, which today it also translates into analyzing the contribution of the plant world on the issues of pollution, mitigation and adaptation to climate change.

The project combines cultural and artistic initiatives with scientific dissemination, disseminated in a laboratory and didactic mode, which has the advantage of bringing citizens closer to issues that are not always easy to understand, and vice versa it offers the scientific community ideas based on the experiences and problems that emerge. from experience. Combining artistic research with scientific research means creating a synergy, showing a theme from another point of view: art uses a language different from that of numbers, which manages to touch the deep chords of the human sensibility “.

The scientific debate will be developed in the conference The study of plants between art, science and ecology, Friday 18 May at 5.00 pm at the Angelica Library, preceding the inauguration of the exhibition. The leitmotif of the meeting is the ideal continuity of the ancient studies of the naturalists who wrote the volumes on display and contemporary scientific research on different plant species as tools for environmental remediation.

The meeting, moderated by Andreco and Sara Alberani (Climate Art Project), will see the participation of Angelo Massacci CNR-IBAF Director, Laura Passatore of CNR-IBAF, Fiammetta Terlizzi Director of the Angelica Library, Ilaria Bussoni philosopher and editor at the publishing house DeriveApprodi and the association Insieme per l’Aniene onlus. 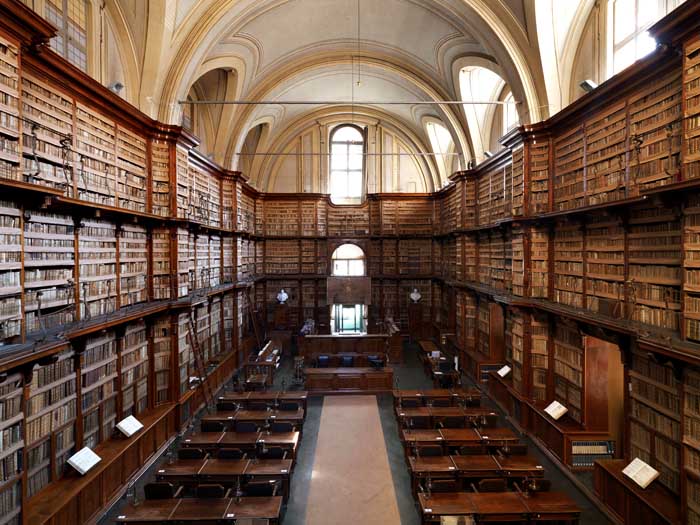 Two other city participation events will be on Sunday 20 May, 10.30 – 13.30, with a walk at the Parco delle Valli in Rome, to discover the Valle dell’Aniene Nature Reserve, led by the naturalistic engineer Paolo Cornelini and Andreco, in collaboration with the association Insieme per l’Aniene onlus. And Tuesday 22 May, 10.00 – 12.00, at Casa del Parco, with a laboratory on the study of plants dedicated to elementary and middle school pupils, followed by an educational visit to the Valle dell’Aniene Nature Reserve, in collaboration with Insieme per l ‘Aniene onlus.

Finally, a storytelling workshop will be held at the Valli di Conca d’Oro senior center from 8 to 14 May, created by Climate Art Project and the ECCOM association, with the aim of recording the memories of guests, between urban green and boom building in the area of ​​the III Municipality of the Capital, whose story will be collected and documented in a video. 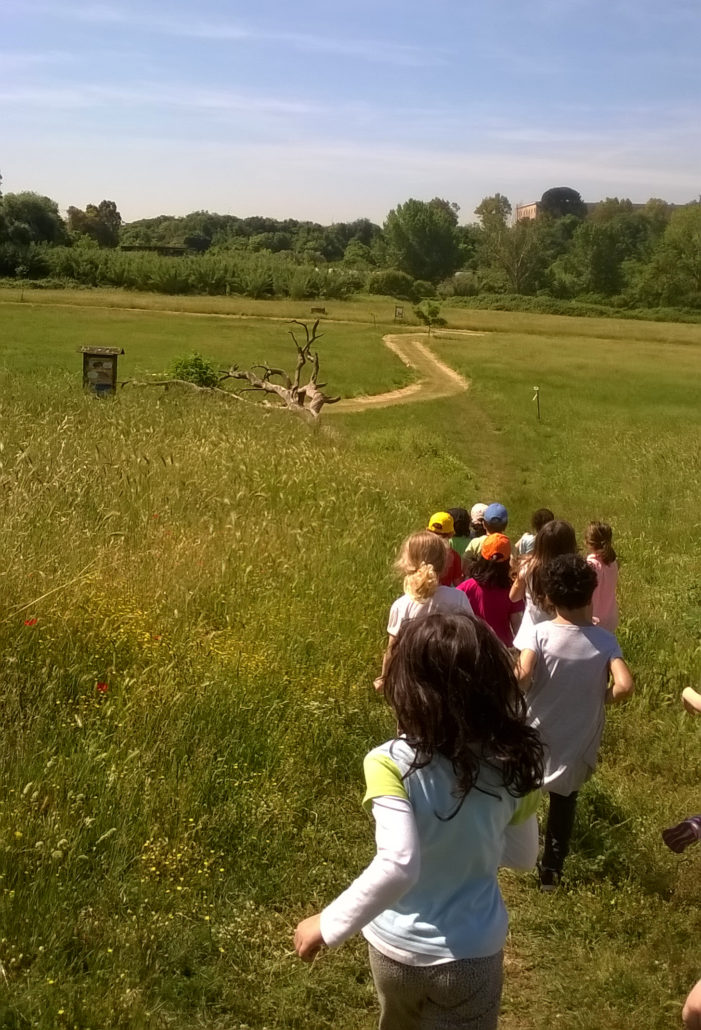 Storytelling workshop “The memories of the past between urban green and building boom, the III Municipality and the nature reserve of the Aniene Park” in collaboration with the ECCOM association, the elderly center of Valli di Conca d’Oro, the association Together for the Aniene onlus.

Reserved for guests of the elderly center.

Conference “The study of plants between art, science and ecology”

Inauguration of the exhibition “De Herbis”, drawings by Andreco in dialogue with the naturalists of the past, curated by Sara Alberani. Cocktail will follow.

The exhibition is free to enter.

Walk to discover the Aniene Valley Nature Reserve with the naturalistic engineer Paolo Cornelini and Andreco, in collaboration with Insieme per l’Aniene onlus.

Laboratory on the study of plants and educational visit for schools to the Valle dell’Aniene Nature Reserve, in collaboration with Insieme per l’Aniene onlus. 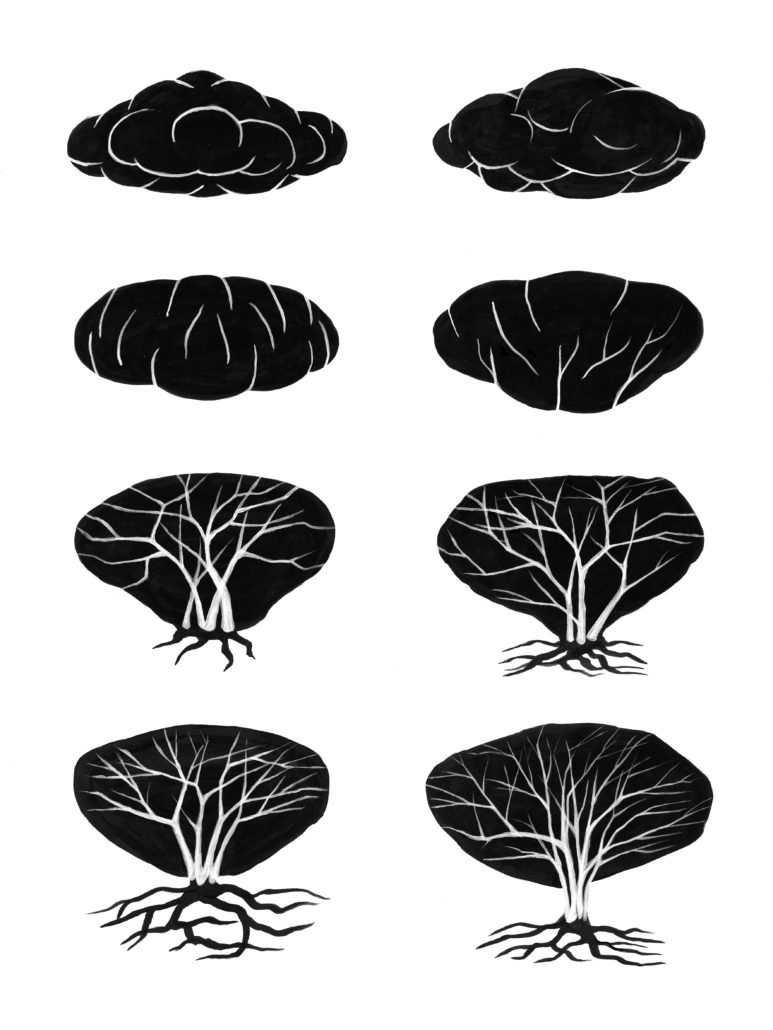 Andreco – From Cloud to Tree

Andreco was born in Rome and works between his hometown, Bologna and New York as an artist and in the field of science. It combines a scientific background, a PhD in Environmental Engineering, post-doctoral collaborations with the University of Bologna and Columbia University in New York on the sustainable management of resources in different climatic conditions, with an artistic path that investigates the relationship between urban space and natural landscape, between man and environment, carrying out projects that make up a single multidisciplinary research. Among these is Climate, a project between art and science on the causes and consequences of climate change. Andreco uses a synthetic, symbolic and conceptual language, using different representation techniques: installations, performances, videos, mural painting, sculpture and public art projects. He participates in international exhibitions and festivals. He won the Special Prize of the “Talent Prize 2017” at the MACRO Museum in Rome and, in 2016, he was the winner of Jazzi, the competition for ideas for rural regeneration.

Sara Alberani was born in Faenza (RA), currently lives and works in Rome as an independent curator. She graduated with honors in art history at the La Sapienza University of Rome, with a thesis that addresses participatory and laboratory artistic practices as a work of art, through an analysis of the Italian context from the 90s to today. In 2015 she obtained a scholarship from the ULB in Brussels, Department of Art History. Since 2014 she has been the creator of The Nationless Pavilion project, in Venice, and co-founder and curator of the Nation25 artistic platform. Since 2018 she has been the contact person for the Climate Art Project, together with her founder, the visual artist and environmental engineer Andreco. Each of these projects uses artistic practice as a tool for investigating reality, for a multidisciplinary, educational, active approach on contemporary issues, such as migration and climate change.

The Climate Art Project cultural association, founded on 1 March 2018, was established with the intention of continuing some cultural aspects related to scientific and environmental dissemination through contemporary art, already developed by the artist Andreco in the last ten years. In particular, he takes care of the dissemination of Climate, the artist’s project between art and science on the consequences of climate change. The association was also founded around historical-artistic figures, cultural operators and art curators, to promote Climate as a reference for art-environment projects at an international level. Climate was presented for the first time in Paris in November 2015 on the occasion of COP 21, the conference on Climate Change of the United Nations, and then continues in the cities of Bologna, Bari and Venice. The project consists in the realization of a series of diversified interventions based on the territory in which they take place, which include installations in the urban space, wall paintings, workshops and seminars that link the artistic discipline to the scientific one, in a dialogue that is translated into works by the artist, drawing inspiration from the latest scientific research on the causes and effects of climate change. These projects, often based on and accompanied by accredited scientific studies, are the heritage of the cultural association which is committed to expanding the information and teaching part. 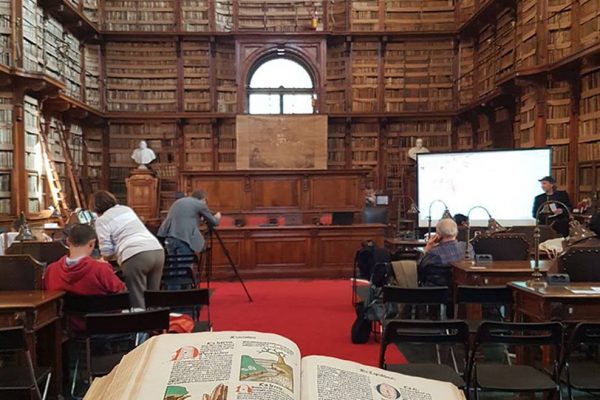 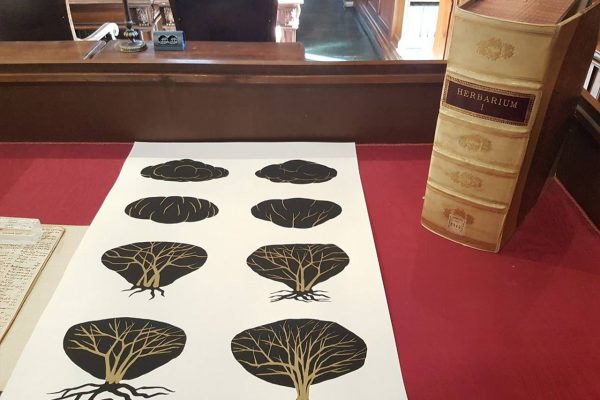 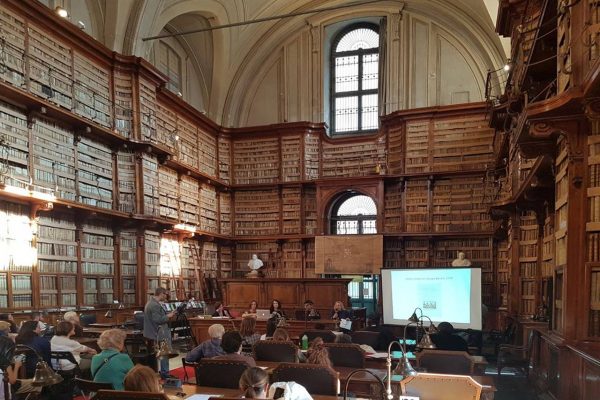 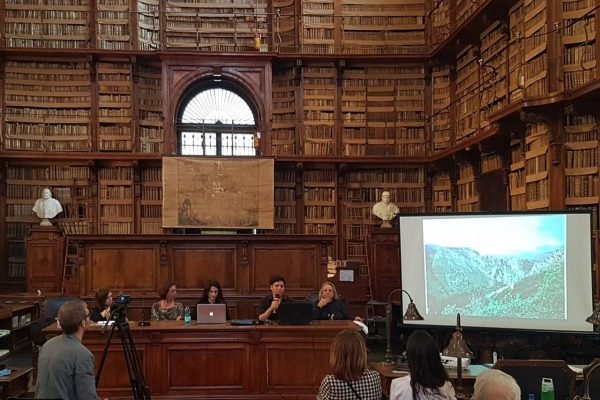 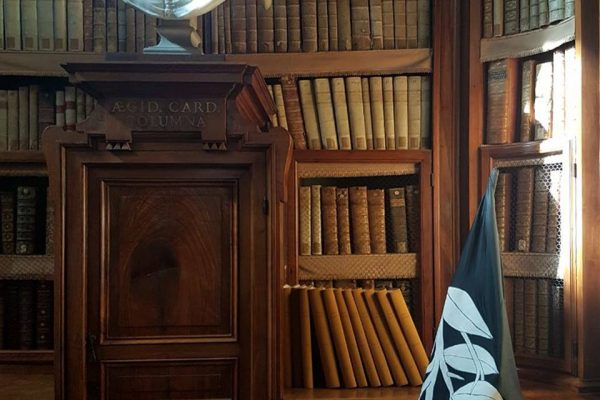 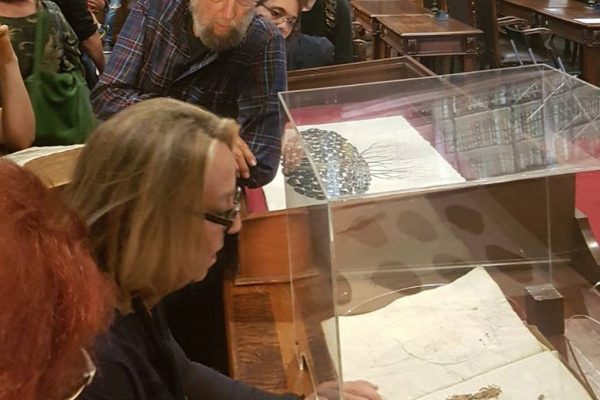 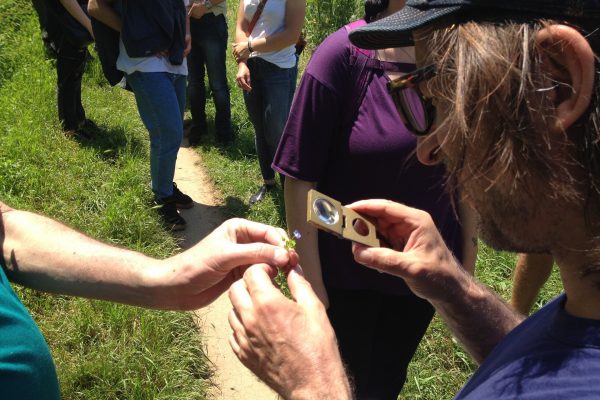 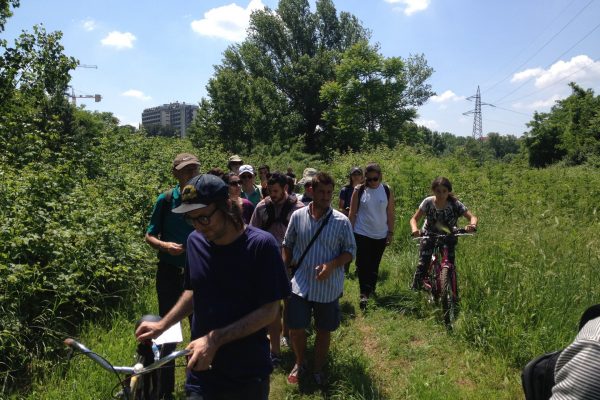 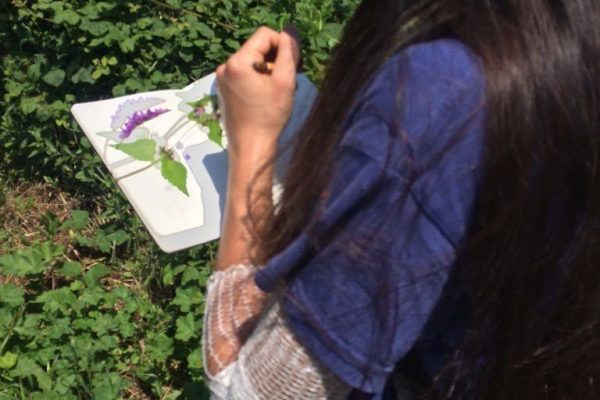 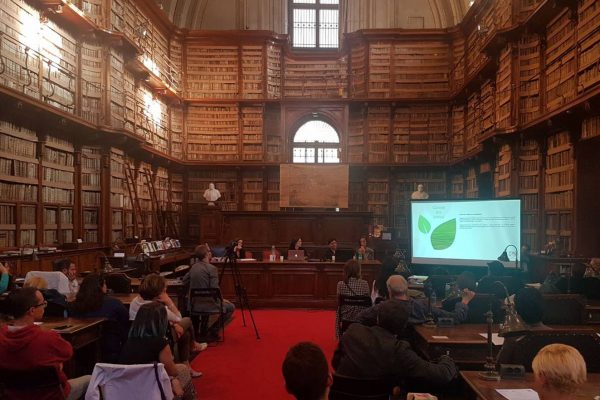 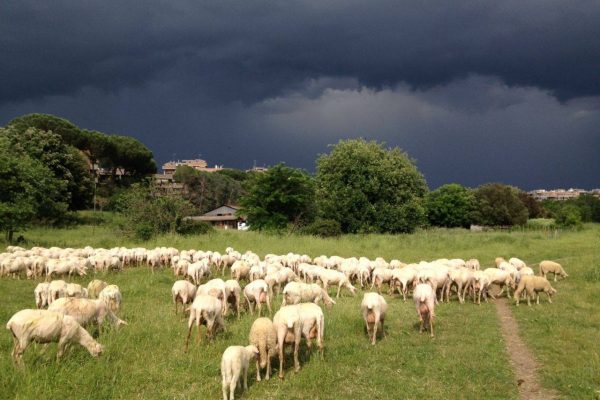 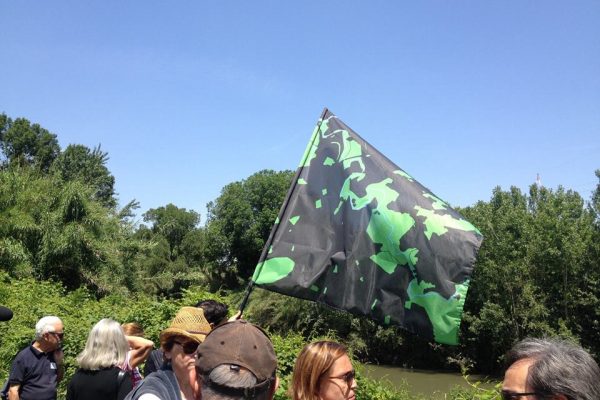 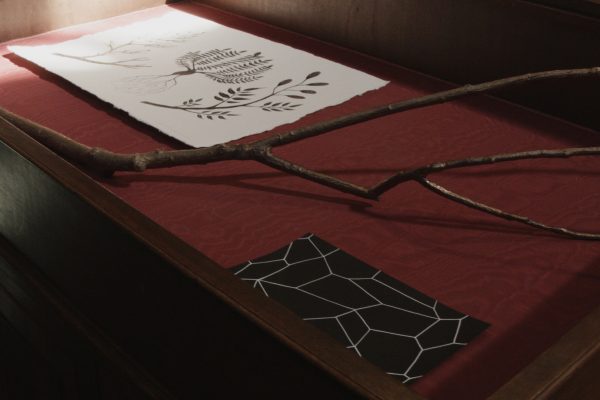 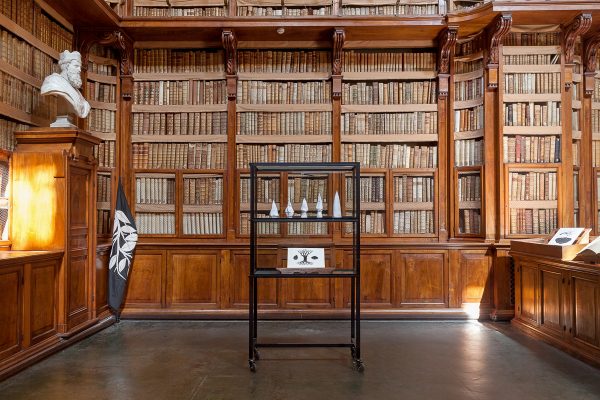 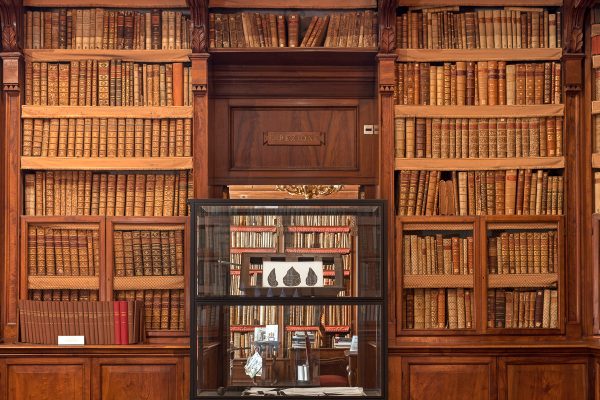 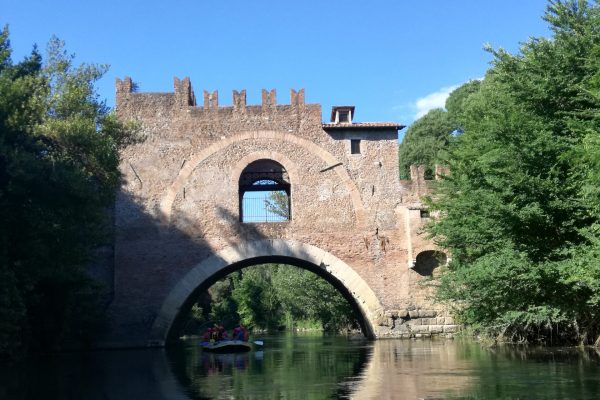 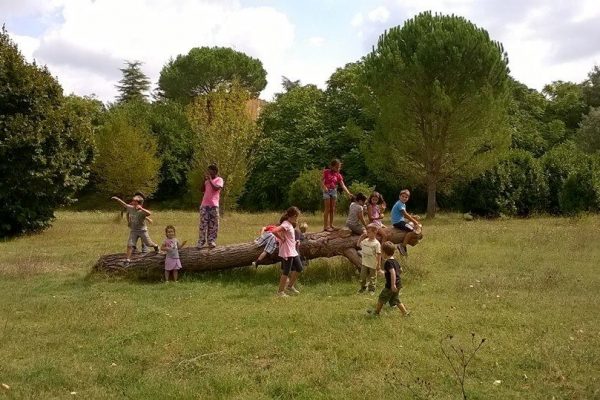 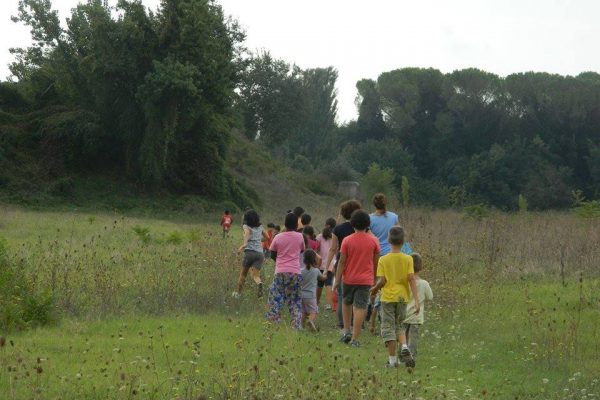