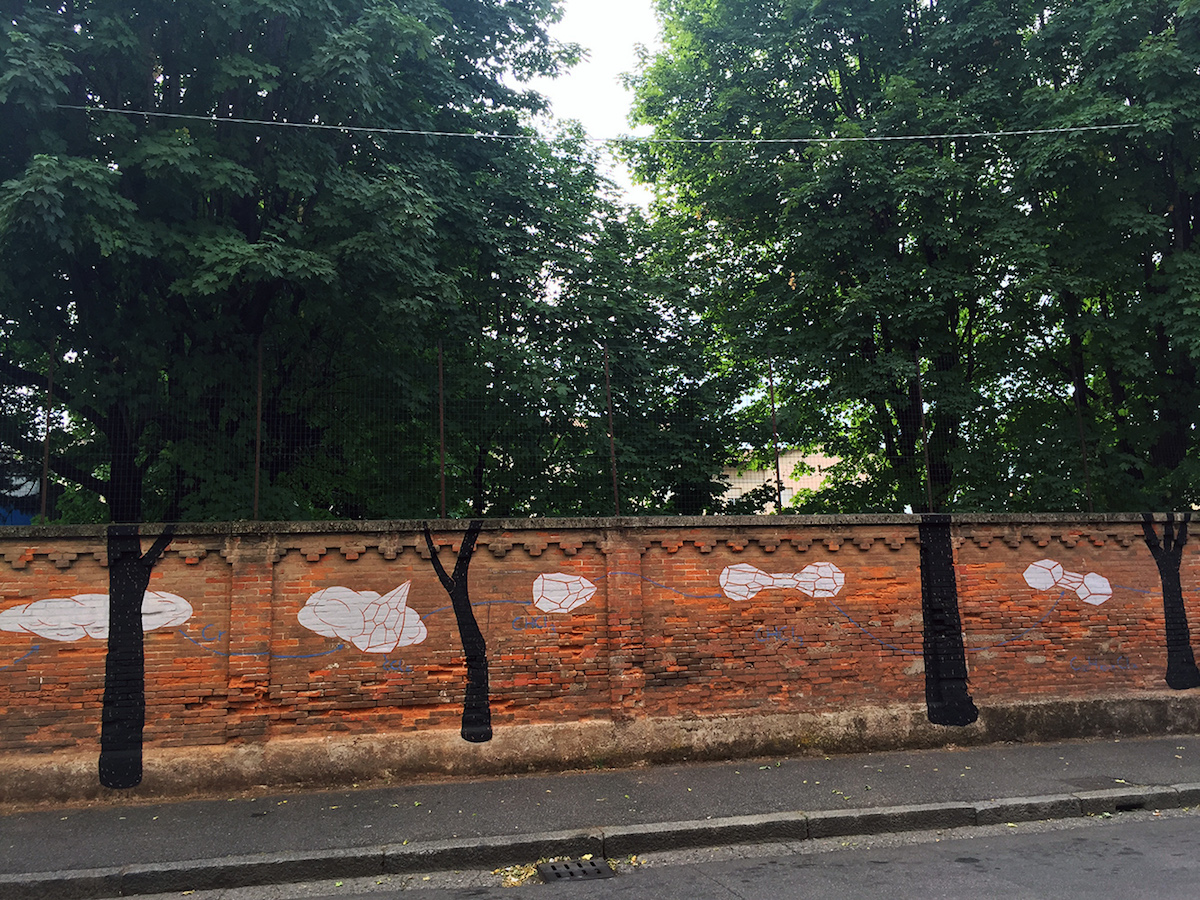 In May 2017, the Cultural Association In Fact and In Fiction invited Andreco to design an urban art project that included a workshop course for young people, from the Istituto Vittoria Razzetti Onlus, Carmen Street and CFP Educo and the creation of a mural within the working-class neighborhood of Porta Milano.

Andreco, an environmental engineer and artist who bases his research on the relationship between urban space and natural landscape, moves between public art, performance and drawings, having developed an aesthetic characterized by symbols and iconic figures, in which nature and its transformations become the work itself.

The project was part of the initiative “E noi siamo la città,“ sponsored by the Istituto Razzetti and c.a.g. Carmen street. Participation was within the context of the competition “Città del noi,” organized by the Fondazione della Comunità Bresciana, in collaboration with the Comune di Brescia.
The project consisted of a series of workshops aimed at young people, led by In Fact and in Fiction in collaboration with Andreco, based on the theme of travel, a trait d’union that connects the different backgrounds and origins of the youth involved.
By taking inspiration from the fantastic and metaphysical itinerary of Mount Analogue by René Daumal, the project was constructed through the connecting threads of various elements: from the idea of an inner and outer journey, passing through reflections on signs, markings and iconic drawings, reaching the symbolic and essential imagery that characterizes the artist’s aesthetics.
The final result of the series of workshops was the creation of a collective mural, within the Istituto Razzetti, designed and executed by the participants.
The mural depicts the “silhouette” of a fantastic territory that changes in its hydrographic and geomorphological conformation, without interruption of borders and states. Icons, drawn by the teens, of their recalled travels float at mid-height in the skies that loom above this alternate landscape.
The result is the representation of an itinerary, starting from the mountains and arriving at the sea, that traverses through an abstract place, a “psycho map”, which can not be found in a geopolitical atlas, but only in the imagination of those who participated.

During this same period, the artist completed a mural along the wall of via Luzzago (Brescia), which drew inspiration from contemporary scientific research in the field of bioremediation techniques, the purification of polluted soils through the use of particular natural elements.

The painted wall is located within the Porta Milano neighborhood, a historic crossroads of the city, which in the early twentieth-century became its industrial heart and, as a result, a residential area of workers. The history of this area, particularly because of the Caffaro chemical plant, was marked by serious pollution problems that also affected other urban areas, turning Brescia into one of the most polluted industrial sites in Italy. Today, the factories are abandoned, but Porta Milano remains a popular and strongly multicultural neighborhood.
The wall that houses the artist’s work, Phyto-remediation, is part of the Istituto Razzetti’s protective wall which prohibits the young people from what lies on the other side: toxic soil contaminated with elements such as dioxins and PCBs for which a future reclamation work is envisaged.

Looking at the red brick wall, you immediately notice what’s behind it – big trees that stand at four times its height. What often strikes me about the place are the elements of nature. Just look up. By changing the visual trajectory, tilting the point of view to some degree, you see so much beauty.
From two different points of view, marked and positioned at both the beginning and the end of the wall – like two fires of an ellipse – you can see the painted trees in exact continuity with the real trees behind them.
The effect sought is that the painted tree continues into the real tree; the sensation is to break down the wall, or at least make it invisible. The (real) trees are the protagonists of this mural, as is often the case in my work, following the method I called Nature as Art, where the artistic endeavor tries to highlight a natural element and a transformation process of the matter.
In addition to the trees, you notice on the wall the development of some shapes from left to right, accompanied by chemical formulas. The forms undergo an imaginative transformation that draws inspiration from some scientific studies related to the “Bresciano case”, an emblematic case of environmental pollution (…)
The fact that the area was heavily polluted because of Caffaro and other industries in the territory is well known and categorically described by different studies such as the one conducted by Marino Ruzzenenti, an expert in the industrial history of the city.
In addition to wanting to, once again, denounce this condition, the mural wants more than anything else to talk about the possible reclamation techniques of polluted soils, plants and other natural processes.
In particular, I focused on the research conducted by the CNR-REMIDA (Remediation, Energy Production & Soil Management) on various plant species, which are able to disintegrate pollutants such as heavy metals and PCB molecules.
These Phyto-remediation studies along with those of Mycoremediation – mushroom purification – were the most inspiring elements in the creation of the concept of the work.
The mural wants to celebrate all of these oxidations and transformations, both chemical and physical, brought about by plant roots, bacteria and mushrooms, which are capable of restoring an environmental situation compromised by anthropic activity.

The collaboration with Andreco both singularly and within the workshops created an opportunity to interact with a neighborhood and its history, while at the same time to think critically about the idea of urban space. Beyond its functional aspect, it can also generate meaning and relationships; the area where the work is located becomes a space to live in, to be enjoyed, not only by its inhabitants, but by anyone who comes across it.

At the end of the artist’s stay, In Fact and In Fiction, in collaboration with it’s sister association, the VILLA, held a closing event at the Spazio Contemporanea gallery (Brescia). The evening featured a video retrospective of Andreco’s past works and sound performances by American musician Novo Line and Brescian musician Francesco Fonassi.
Novo Line (US / Berlin) is the solo project of Nat Fowler, former Oxes guitarist (Baltimore rock math group), inspired by the automated imagery of slot machines (from which the project takes its name).
Through the deliberate misuse of software dating from the 1989 and with only one megabyte of RAM, an Atari ST personal computer becomes a live tool; MIDI signals are randomly generated, creating a set of variable parameters that trigger synthesizers.
Using the pre-packaged, flat and banal sounds, typical of the 1980’s golden age of production, Novo Line transforms them into a live performance. For this occasion, he lent himself to a long and lucid sonic diffusion, consisting of futuristic sounds of archaic machines, which mark time through Pythagorean scales and algorithmic calculations of electronic drives.
Francesco Fonassi is a visual artist, composer and sonic researcher.
On this particular occasion he brought forth a hybrid set featuring a modular synthesizer and a small selection of discs ranging from 20th century contemporary music to the Italian psychedelic scene of the early 1900’s.

The mural can be found along the wall of via Luzzago, and then continuing at Ist.Vittoria Razzetti, via Milano 30, Brescia. 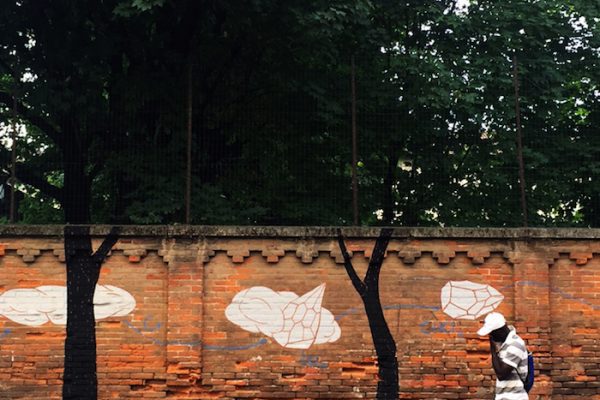 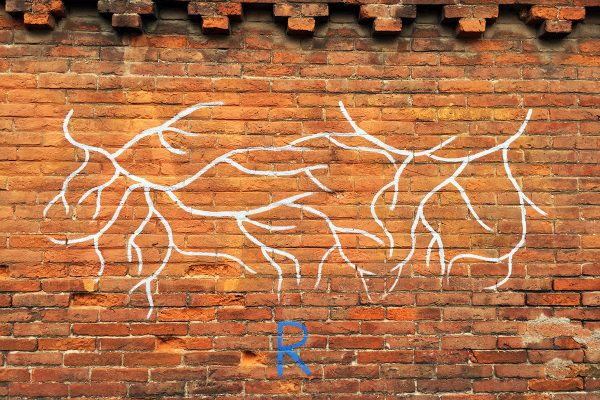 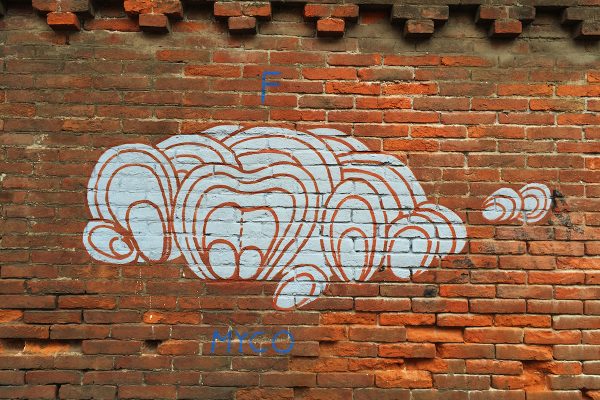 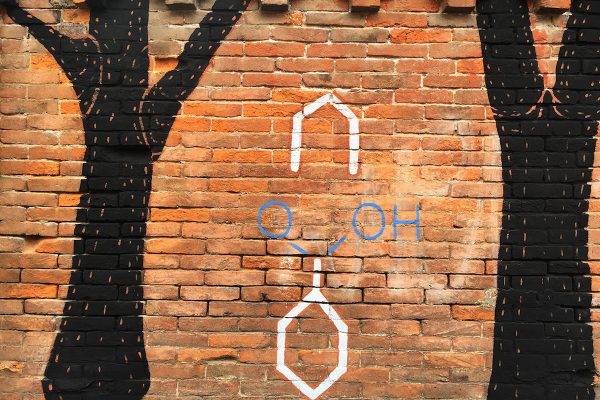 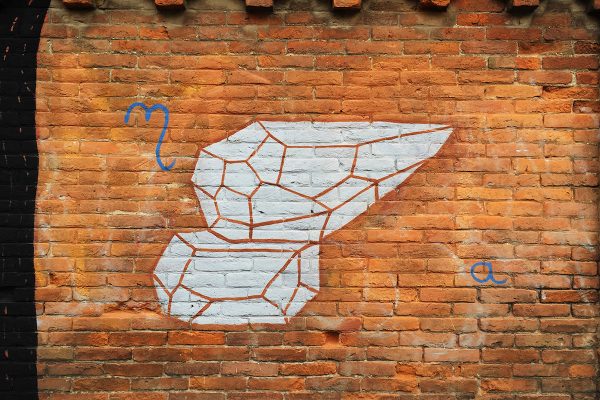 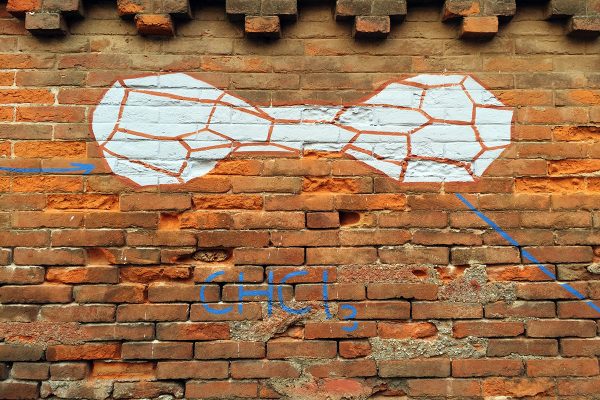 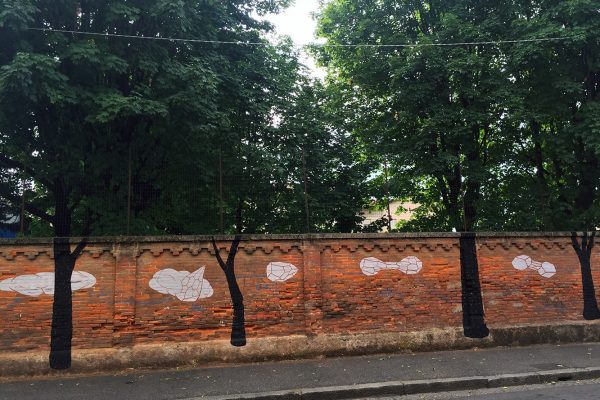 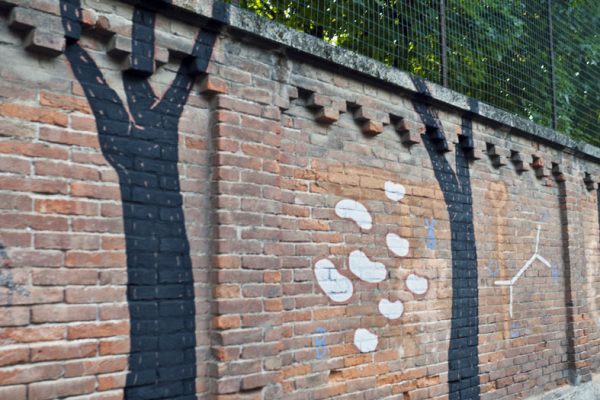 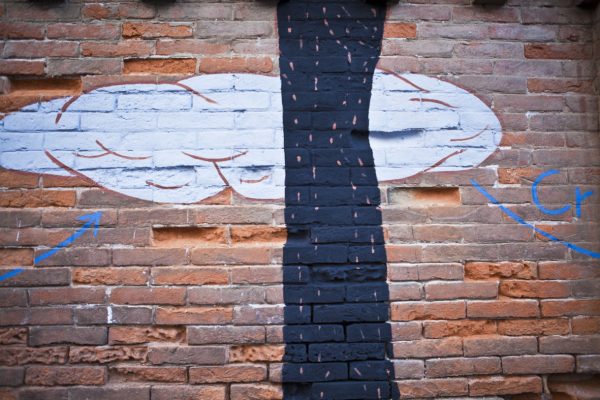 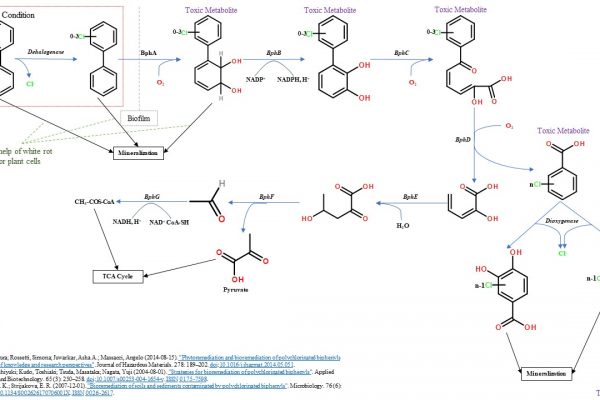 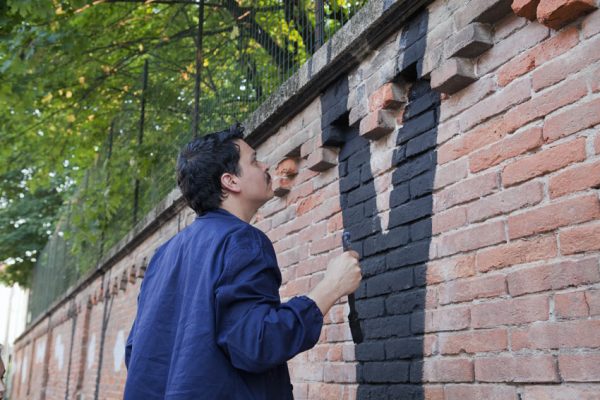 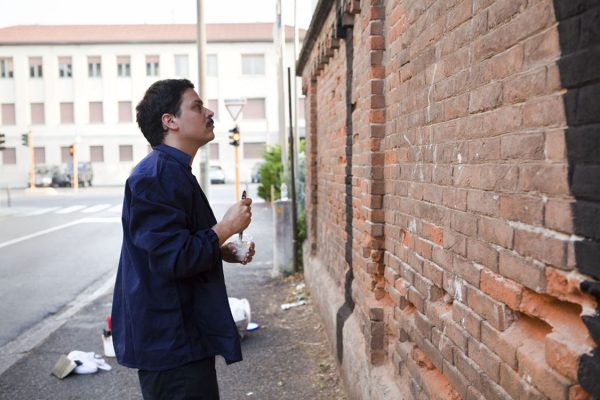 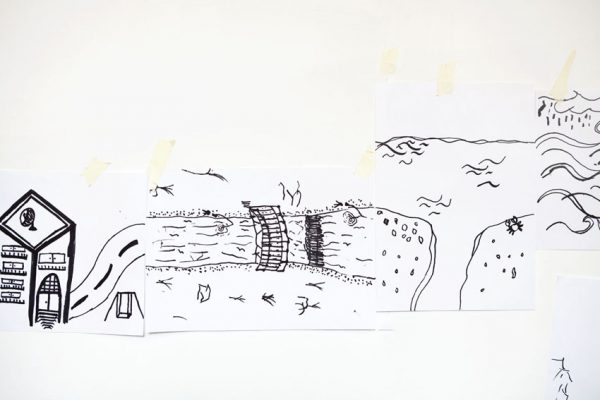 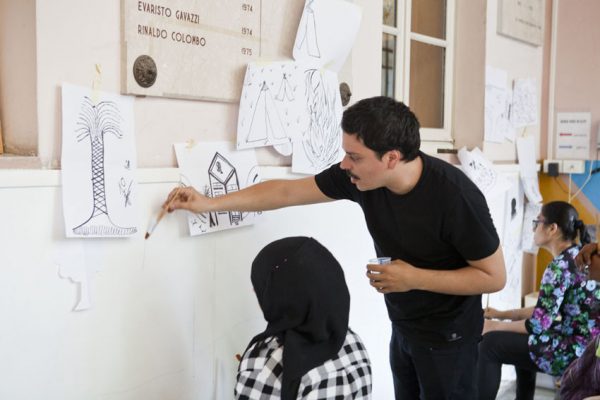 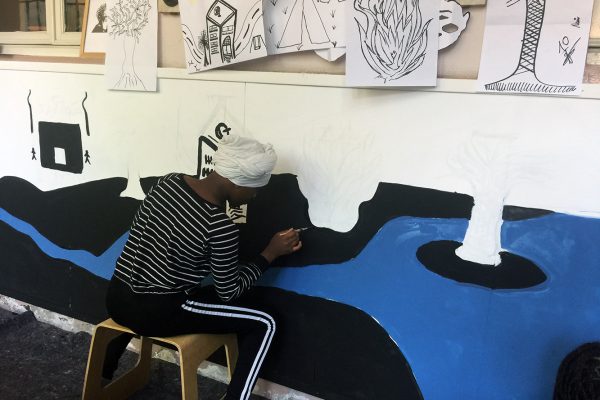 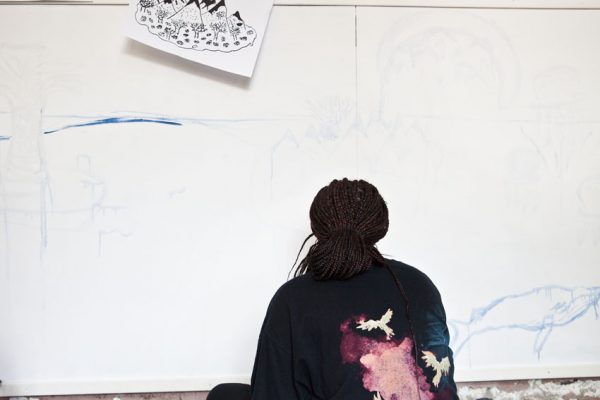 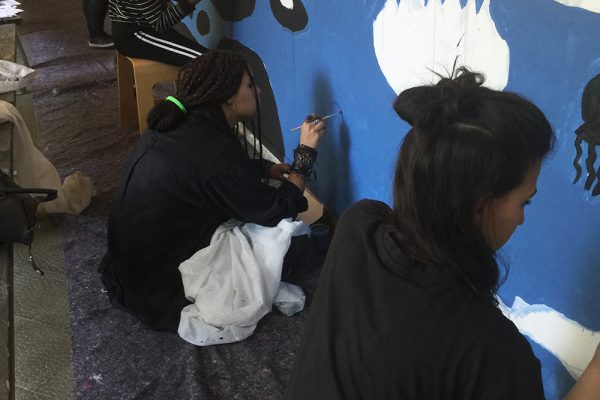