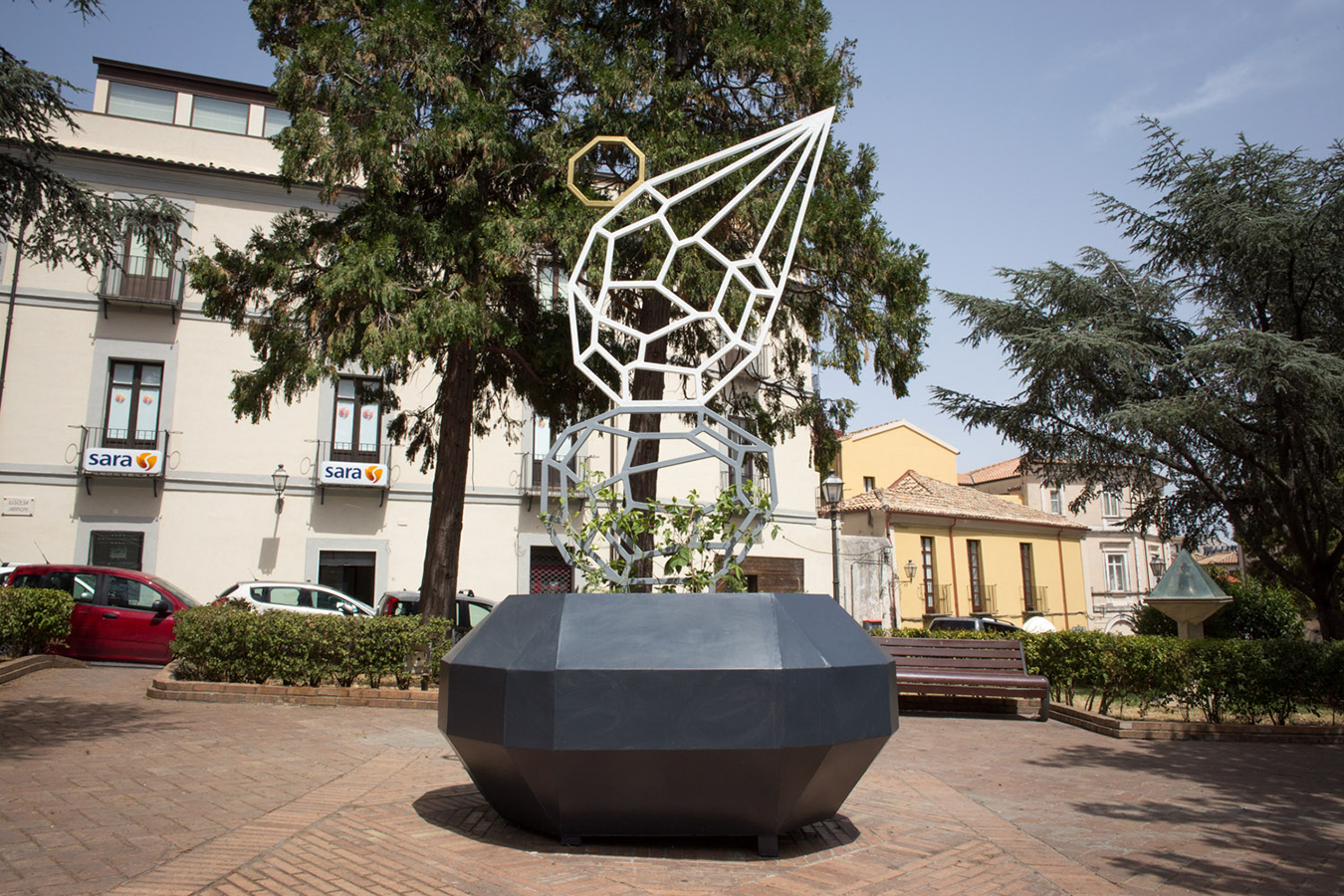 An iron sculpture rises majestically in the beating heart of the old city: the Nicholas Green gardens in Corso Mazzini. A site-specific work by ANDRECO, a project entirely studied during his residence in Catanzaro and realized thanks to the collaboration of the artist with a team of local wrought iron master craftsmen. The work, although majestic in size, delicately fits into the urban environment, offering different points of view that interact with the spaces, volumes and trees of the square in the city center.
The solid, scientific and symmetrical base draws a polyhedron with a thousand faces, a mother’s womb that houses and protects the cyclical and continuous growth of nature within it. The structure in elevation, slender and two-dimensional, fits between the full and empty spaces obtained from the succession of trees behind it. The central position of the sculpture in the square allows passers-by, daily users of the seats placed on the perimeter, to no longer stare into space but to contemplate a not abstract but symbolic form, an iconic synthesis dedicated to nature and the importance of its preservation.
Melencolia by Andreco is a tribute to the processes of nature that are able to purify anthropogenic pollution and protect the earth from climate change. A frame that collaborates with creepers, a shape that derives from resilient technologies designed to favor the natural processes of some plants, as the best method for adapting to global environmental problems.

MELENCOLIA, is a permanent sculpture created as part of the ALTROVE FESTIVAL in Catanzaro.
The sculpture is composed of a three-dimensional volume, from which starts a two-dimensional iron sculpture on which plants and shrubs climb. The shapes, neither abstract nor figurative, assume a symbolic role at times ancestral, deliberately leaving room for the free interpretation of the observer.

The sculpture that stands at the center of four seats arranged in a circle, like a Platonic solid to be observed and reflected on with or without “melencolia”, as well as a tribute to nature, is a tribute to the famous Albrecht engraving Dürer from 1514 from which it takes its name.

The work was created specifically to be installed inside the Nicolas Green gardens, and therefore arises from a reasoning on the surrounding empty and full spaces, from the geology of the territory, from the chemical-physical processes and transformations fundamental for the Ecosystem conservation: the scientific studies which inspired it concern green infrastructures and their mitigation and adaptation capacities to climate change.

Also this time, the involvement of local artisans, two blacksmiths from Gimigliano (Luigi and Giacomo Gigliotti), was essential for Andreco, who worked closely with him along with many other collaborators, becoming an integral part of the creative process.

The varied debate that MELENCOLIA has aroused in the local community has prompted everyone to give their own interpretation and judgment … And so the artist, by questioning and trying to stimulate deep and unconventional thoughts, has achieved his goal. 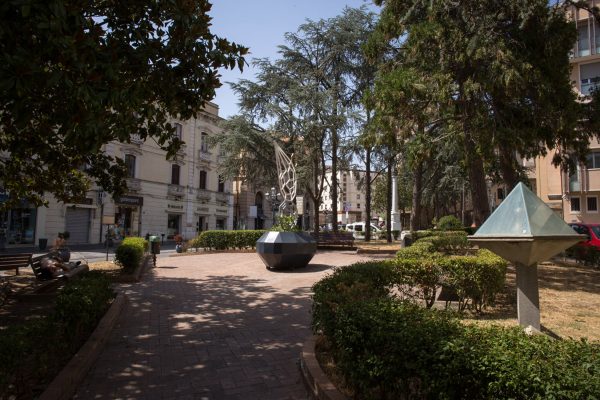 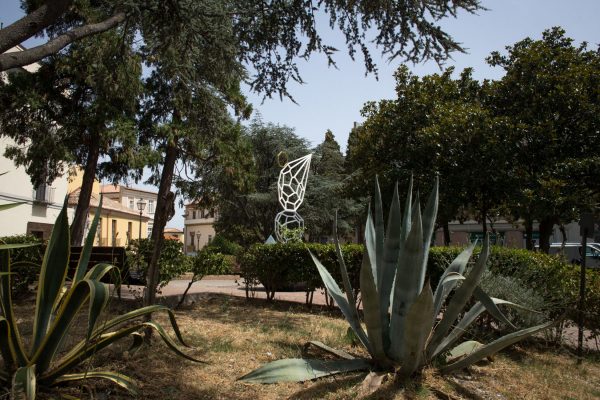 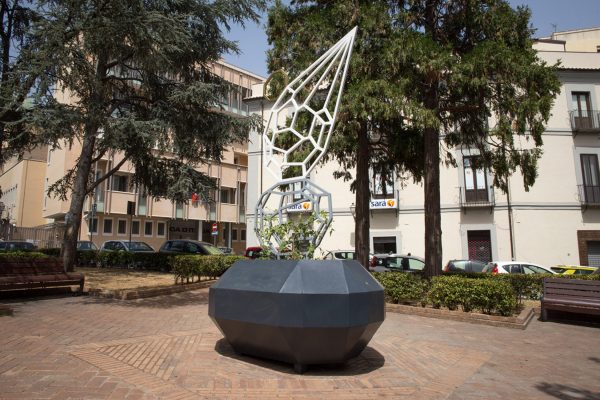 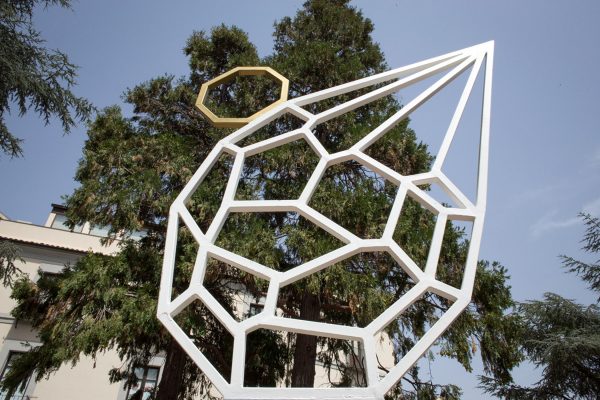 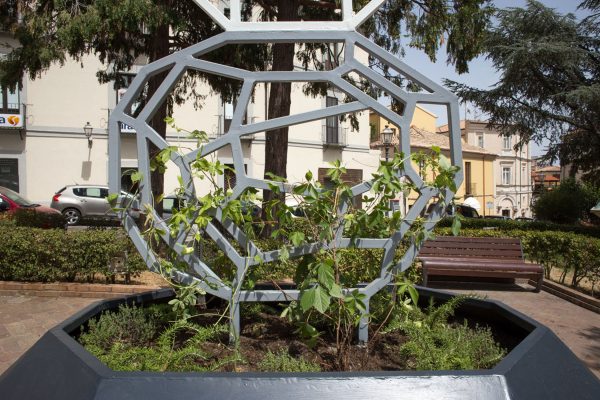 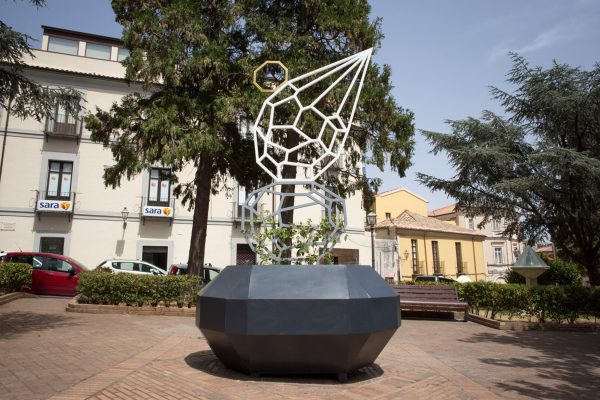 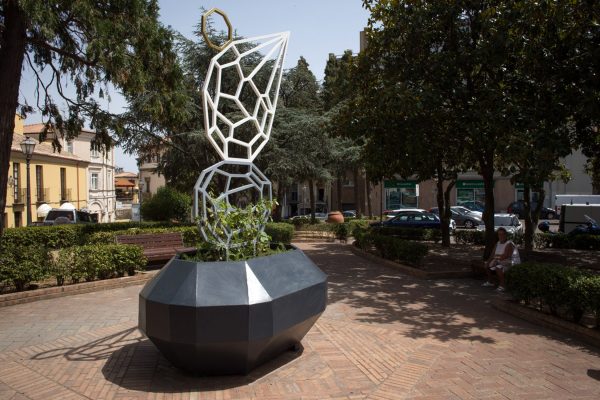 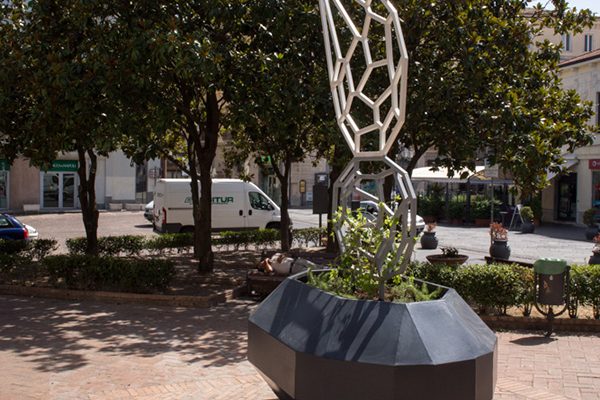 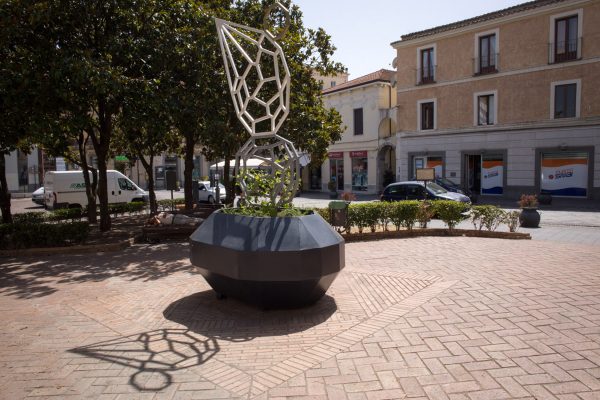