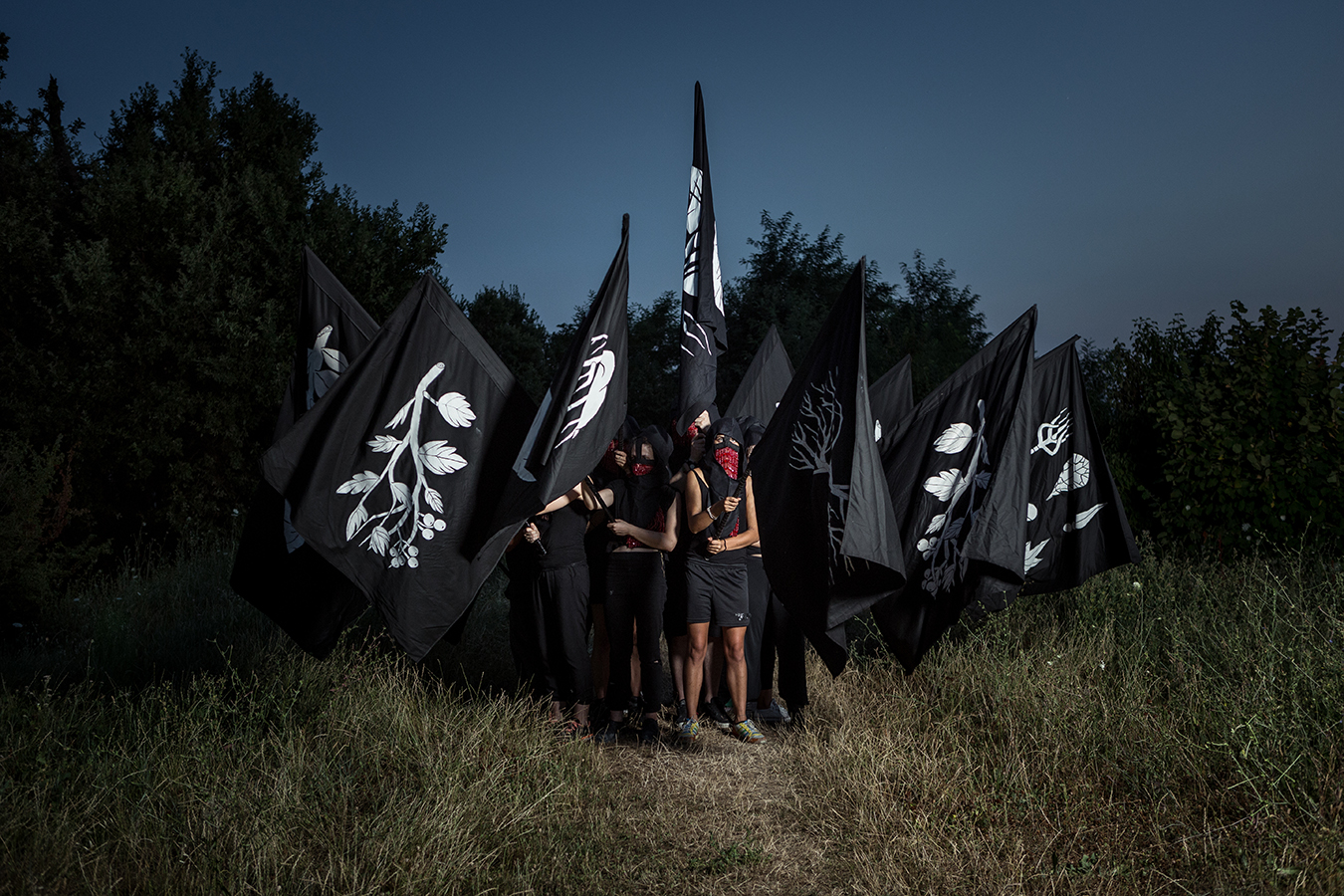 “L’erba Cativa (l’an mor mai)” is a collective performance that draws inspiration from some timeless images and words, timeless because of their subversive power. These come from Aeschylus’s Oresteia, and especially from the figures of the Furious Erinyes, “those baleful children of the night” that symbolize the impossibility of taming wild nature. Rebellious figures difficult to categorize. Presences as enigmatic and mysterious as the performers of the parade that burst into the Santarcangelo Festival 2015, on Saturday July 18th.
Pasolini in his “Notes Towards an African Orestes” links the Furies or Erinyes with enormous trees, shaken by the wind in the African forest.
“But the Furies are unrepresentable under a human aspect and so I would represent them under a non human aspect. These trees, for instances, lost in the silence of the forest, monstrous, in some way, and terrible. What makes Africa terrible is its solitude, the monstrous forms that nature can take. The deep and scary silences. Irrationality is animal. The Furies are the goddesses of the animal moment of man.” *

Starting from this metaphor, Andreco drew the symbols and the whole iconography of “L’Erba cativa” parade, which was fully set up during the Go Deep workshop coordinated at the end of June at the Astoria ex-cinema in Rimini with Motus . Go Deep was an intense participative process articulated around ten days of collective work; thirty-five young people involved in various artistic fields, most of whom living in the local or nearby territory, took part in it. An unforgettable experience that has led to the birth of a new collective of artists, “Godeepers”, who will continue to work independently in the region, also in anticipation of the reopening of the Rimini ex-cinema, that has been closed for 10 years.
The parade started at Parco dei Cappuccini, with the shaking of leafy tree branches and bushes (spontaneous hawthorne and poplars), and finished, after going through the whole city center, at the Sphaeristerium of the city of Santarcangelo. The parade creates an imaginary bond between the natural space (the green space of Parco dei Capuccini) and the city center (the paved Piazza Ganganelli). The whole walk was accompanied by an experimental noise soundtrack, in alternation to fragments of texts and recordings of sounds of nature, composed by the musicians of the collective and played by 4 portable self-constructed PA systems. There were several stops, with lightning-like performances; among them, the “capture of the Campanone”, on which were flying two banners showing black bush branches and a leaf crossed by a knife as “new natural weapons”. The mysterious procession reached Piazza Ganganelli to create a powerful collective image connected to the “Illegal Hawthorne” installation: a tripod suspending in the air a green cloud made with hawthorne. This indigenous plant has recently been prohibited from being planted in the ground as it is a carrier of a virus called “Fire blow” that damages fruit trees (pear, apple, peach trees). For the installation at the festival, the company had to obtain a special 10-day permission. This way, the parade symbolically linked this illegal and banned plant with its sisters that, paradoxically, grow spontaneously not too far in the Cappuccini forest. At the arrival at the Sphaeristerium, the final act of performer Ondina Quadri was to burn a wind flag painted by Andreco, representing a cloud. The burning cloud, among the growing sounds, accompanied the last words of the parade: a citation from the Oresteia translated into Italian by Pasolini.
“How to explain that we have broken the chain that makes the Past a source of certainty, the certainty of which we are full and insatiable
The certainty that, from the bottom of centuries, gives the reason to exist in every instant act of the city; the certainty that saves us from scandal…
A certainty that feeds on cowardice, mediocrity and brutality.
But what is the point of a certainty founded on terror?”** 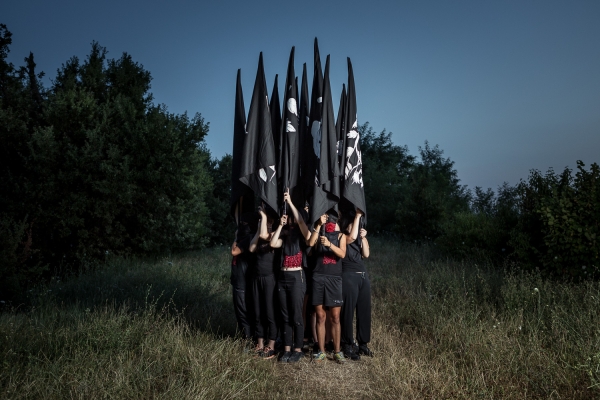 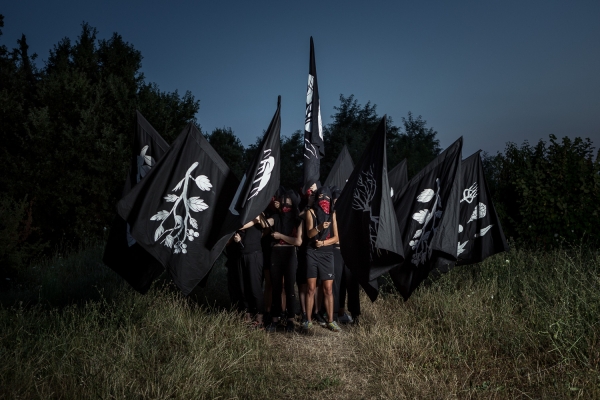 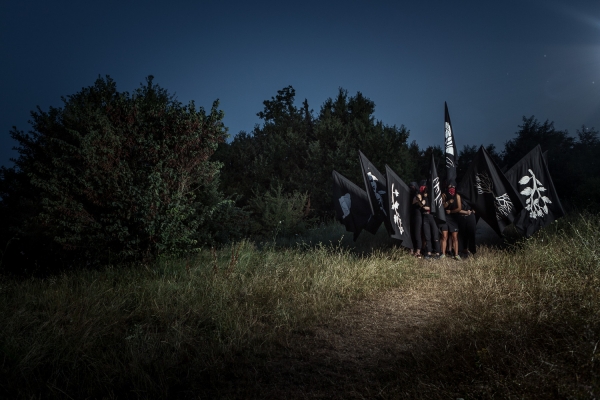 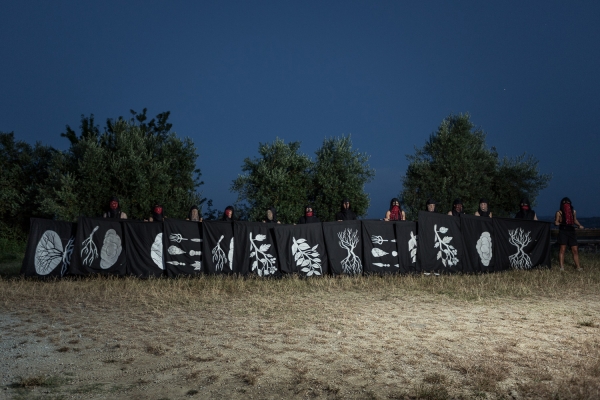 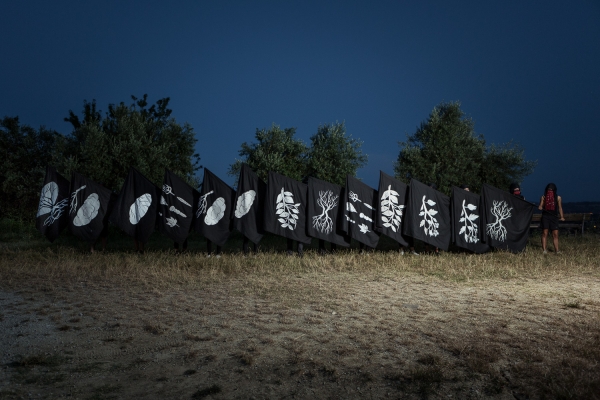 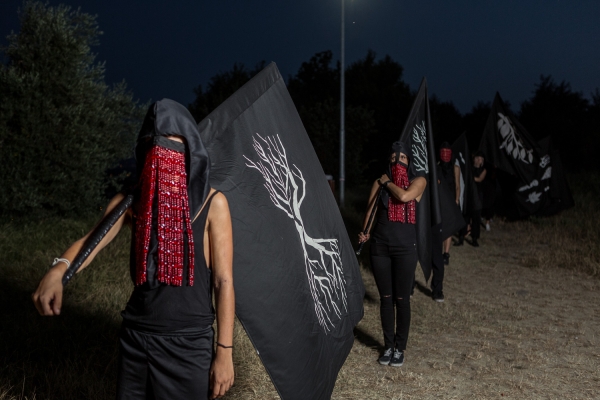 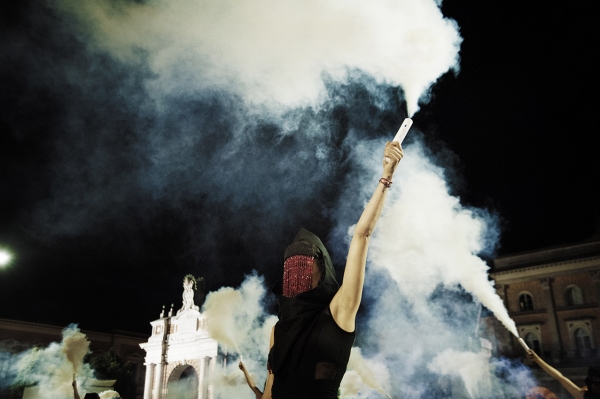 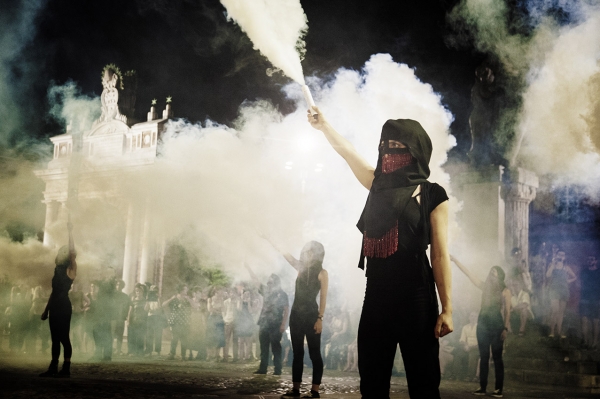 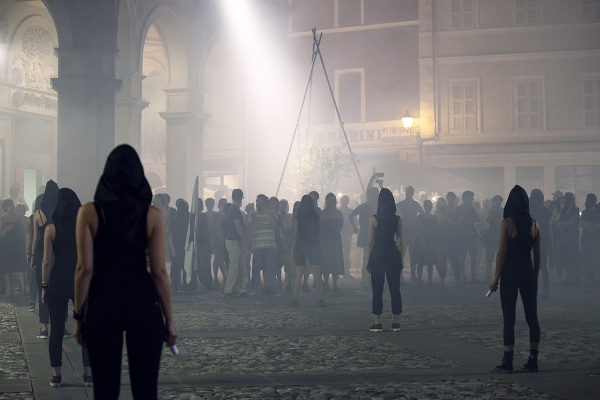 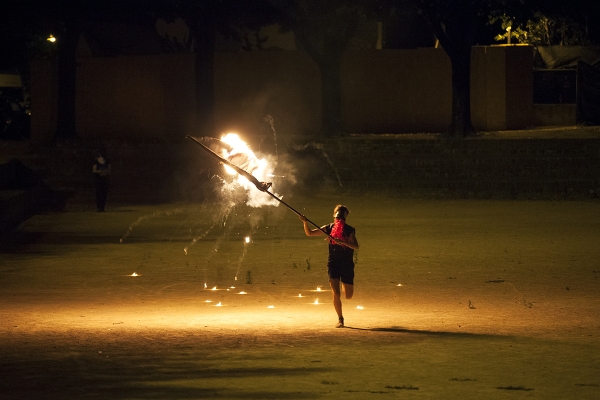 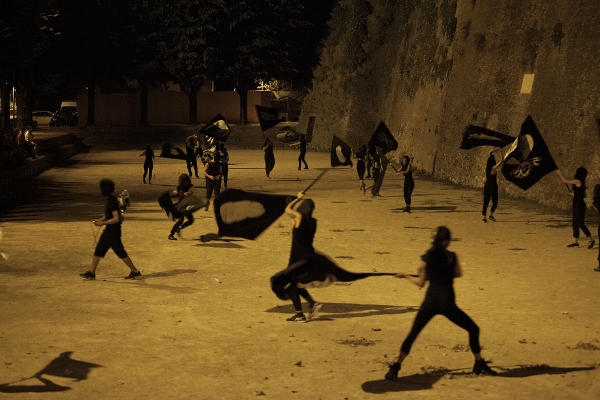 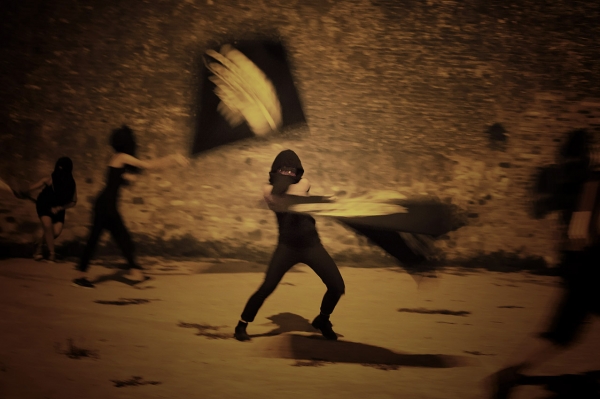 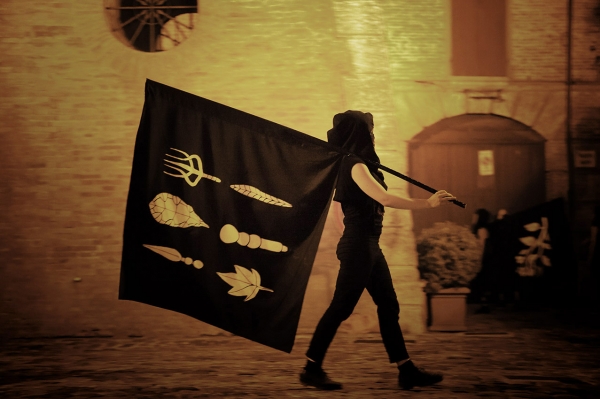 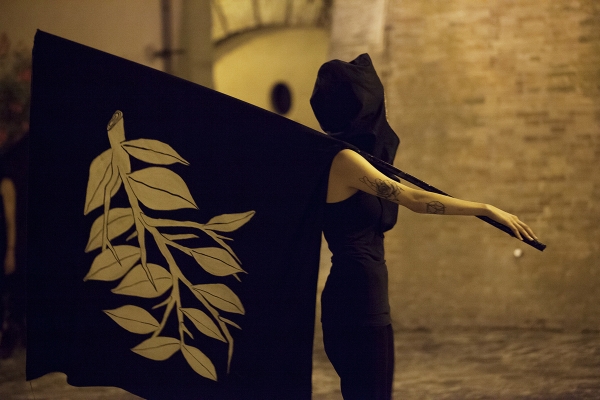