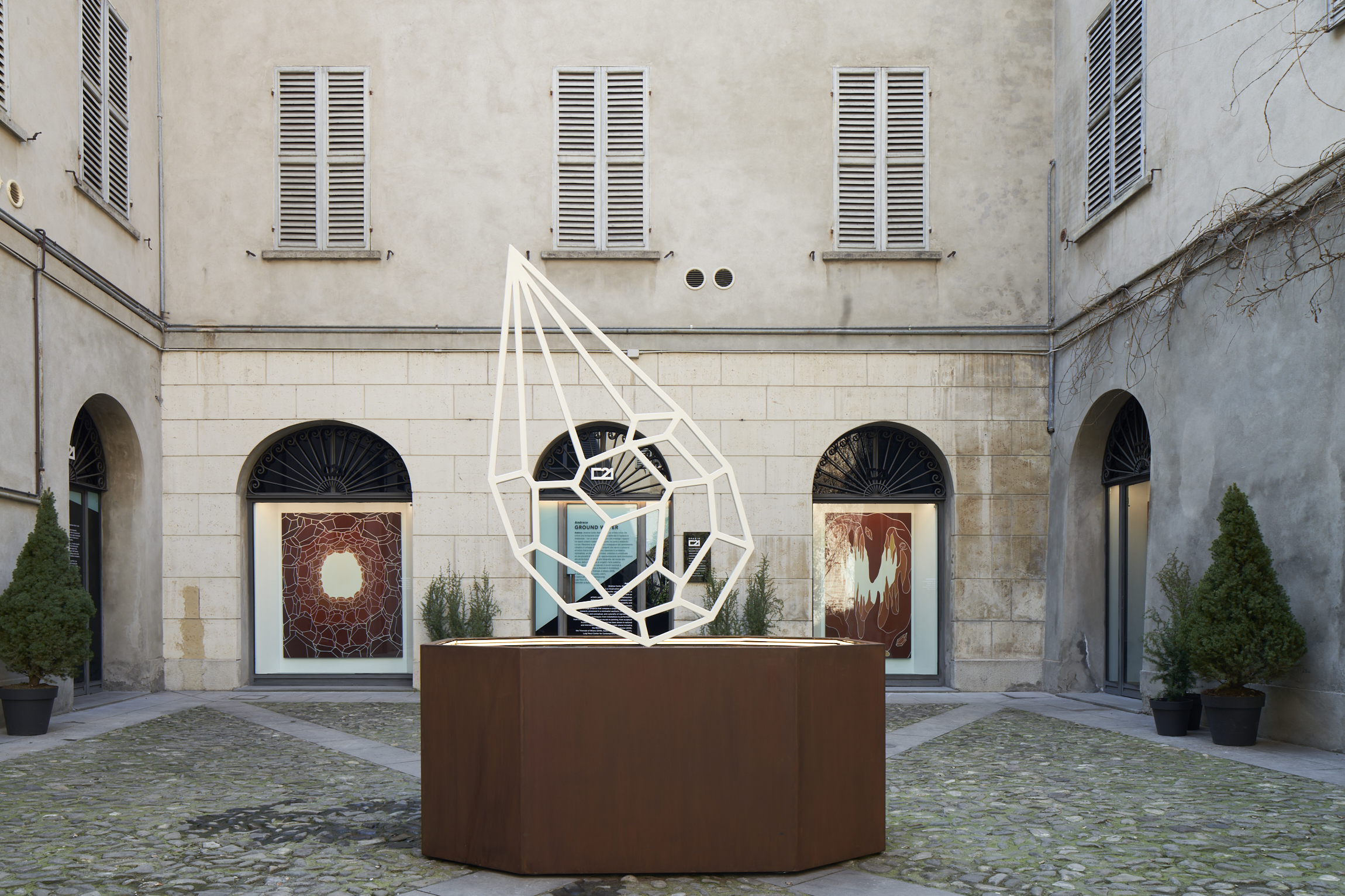 A new project by Andreco on view at SpazioC21, Reggio Emilia

On view form March 11 to May 11 2021, “Ground Water” is a project by Andreco (Andrea Conte, Rome, 1978), exhibited in the courtyard and in the windows of SpazioC21 at Palazzo Brami, Reggio Emilia.

The group of works – made up of four large canvases and a sculptural installation staged in the center of the courtyard – deals with the theme of water, its life and its shortage. The works express the artist’s investigation on a extremely contemporary theme in our society: the effects of climate change on the environment in which we live.

“In the paintings the protagonist is the void – Andreco says – the space conquered by the water resources thanks to physical-chemical phenomena of transformation of matter. The canvases reveal the invisible, show the glow that illuminates the underground cavities, observed from the dark perspective of their interior. The aim is to build a safe space of care and respect for deep geologies and natural resources, an indispensable action to establish a symbiotic balance between living beings and the planetary ecosystem of which they are part” ..”The sculpture reminds a rain drop the instant it touches the surface of the water table.”

Andreco’s reflection on water, integrated into the meta-theme of environmental sustainability and climate change at the heart of his artistic reflection, reminds the observer of his responsibilities towards the environment. The drop of water is a metaphor for life; his absence is the end of it.

If one of the purposes of art is to solicit debate and reflection on our future, the artist points us a way. His immediate, minimalist and respectful language offers us a lesson in civil responsibility and an invitation to a new future.

The critical text “Ground Water” is edited by Claudio Musso, the photographs and installation views are by Fabrizio Cicconi.

Droplet of water on a hot stone

It would neither be possible nor appropriate, given its gravity, to treat the fundamental and delicate question pertaining to the “Water Crisis” as if it were one of the many dystopian Science Fiction movies we as an audience are often offered.

Climate change is underway and the Human Being is an integral part of it, even before being considered its main cause. It won’t be a drop in the ocean that will reverse the process currently in progress, and indeed, never before has the notion that a single droplet might lead a bucket to overflow been so clear: the world does not change overnight, but drop by drop, dripping water hollows out the stone.

What then is the journey of such a droplet? According to Élisée Reclus “[…] our gaze is not wide enough to embrace the trajectory of the droplet as a whole, and we limit ourselves to following it in its turns and jumps, from when it appears in the source until it mixes with the water of the great river or the ocean.” The Ground Water project by the artist Andreco (Rome, 1978) springs from the very source of this statement: following the path of the waters where they disappear from our eyes and are buried, opening cavernous furrows. This is why water, its flow, its physical characteristics, even its (non) color have disappeared from the depictions that occupy the large canvases. These waters evoke presence in absence, gaps able to converse and communicate what generated them, attempts to trace the boundaries of the void, they are vacuum forms. Moreover, in the underground cavities it is precisely the water basins, beyond their size and dimension, that constitute the most powerful modeling force of the earthly skin of our Planet. Rivulets, brooklets, canals, streams and even rivers flow beneath the earth’s crust and in the impenetrable depths, creating unreachable places, where life sometimes develops. Giuseppe Penone wrote in 1980: “The two perfect ones, totality of the image, the fluid and the solid in the slow flow of the waters, produce sculpture. […] The river is endowed with a marvelous agility, its flow is a continuous and insistent, tactile and eternal method. […] The river carries the mountain, it is the vehicle of the mountain ».

What is left then when the waters subside? The best known calcareous concretions formed through the loss of carbon dioxide from the surface of the water droplets are stalactites. They appear as plastic forms, the result of a sculptural process: they can be similar to the statuary as they rise as inverse obelisks, or when they stand out as pinnacles; they can appear as architectural elements when, in karst caves, they extend to the floor like columns in a nave. The colors that distinguish the hollow caverns where the aqueous residues pour forth, find themselves forcefully inserted in the artist’s palette, from ferric oxides to earths, from crystalline sulphates, to the white mineral opacities of carbonates. The rocky elements that pervade the painted compositions emanate a glaring centripetal force: like diaphragms they shrink, aiming the fire towards the center of the painting, towards the snowy whiteness, the space left by the water. Liquid that evaporates, residues that settle, chemical reactions and changes of state designed to describe the transformations of natural elements to the stunned eye of the alchemist. Nature told through symbols regains a centrality in public discourse not only as an environmental emergency, but as an active part of the vital flow to our present. The remote places, explored following the path of the waters, can be defined as interior rather than internal because in them, too, time assumes proportions of a geological nature. It is not the speed of flow of a liquid in a duct that dictates the rhythm in the caverns that offer themselves as a scenario, rather it is the cadenced pace of a droplet fixed in the moment in which, having reached the surface of the water, it is about to dissolve. It is the same droplet from which the cycle began, which bears upon itself the edges of the rock, the memory of the journey made, the traces that water and earth have reciprocally exchanged. 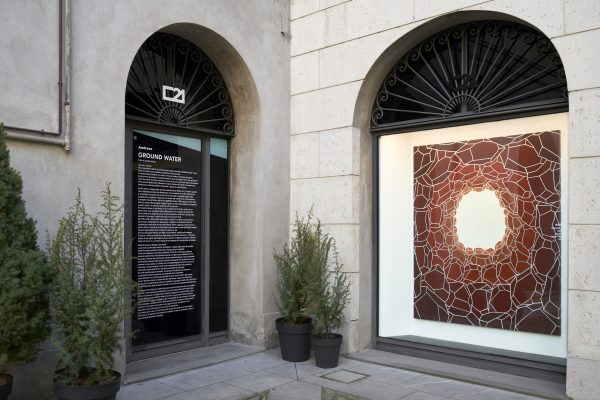 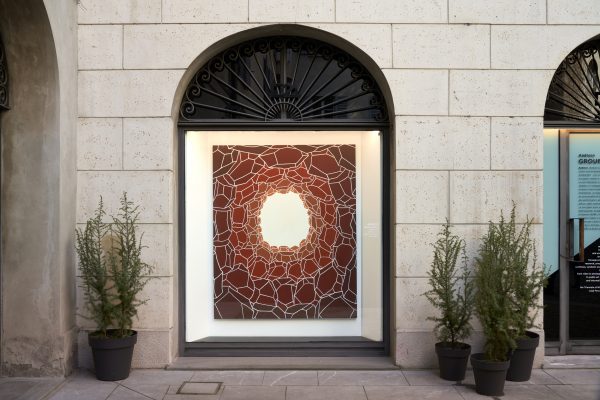 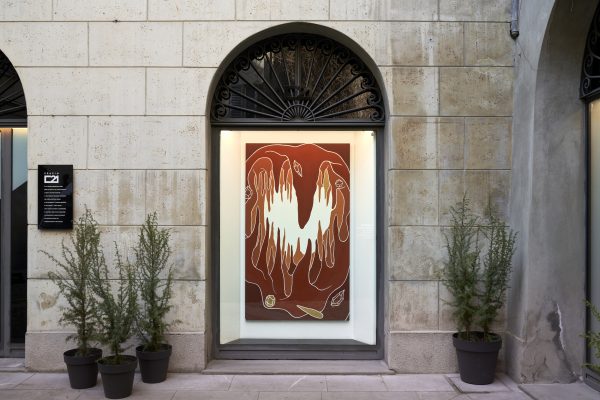 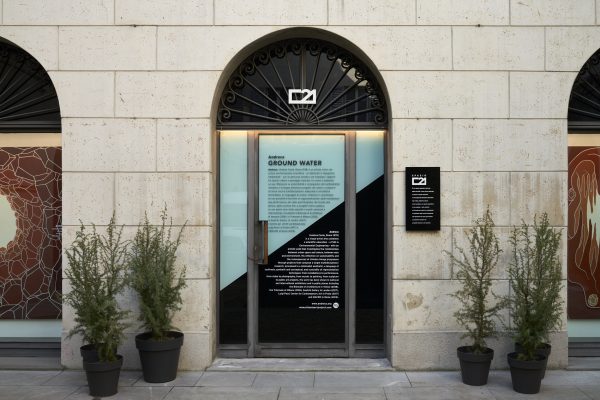 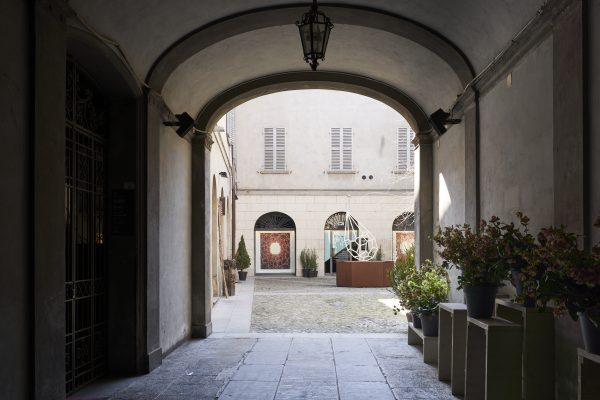 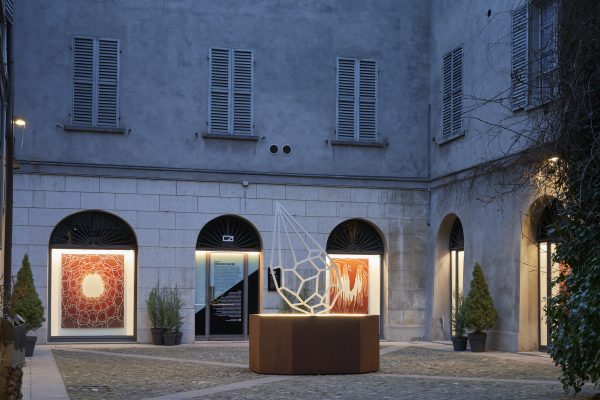 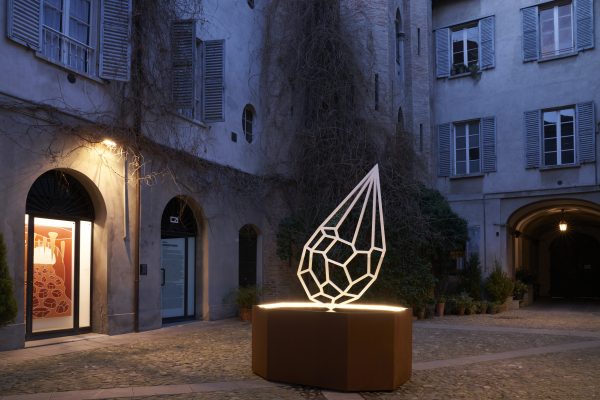 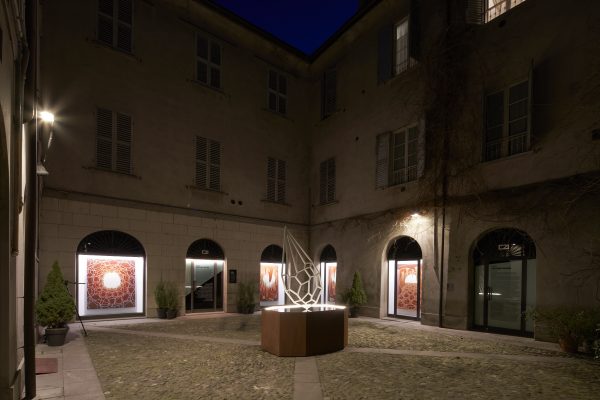 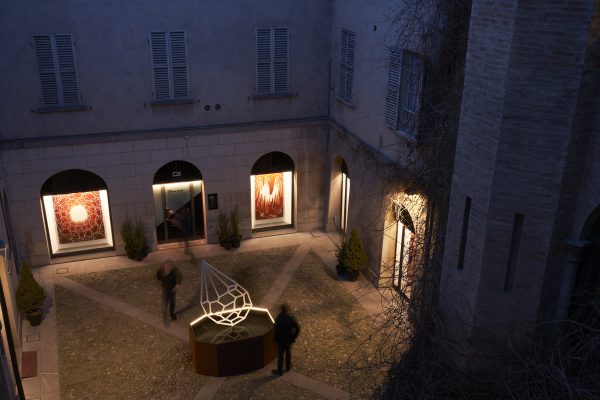 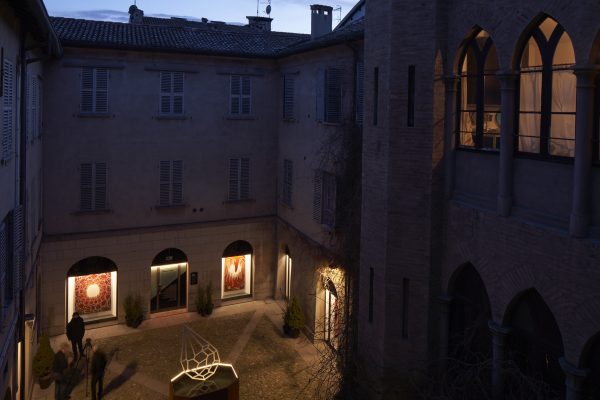 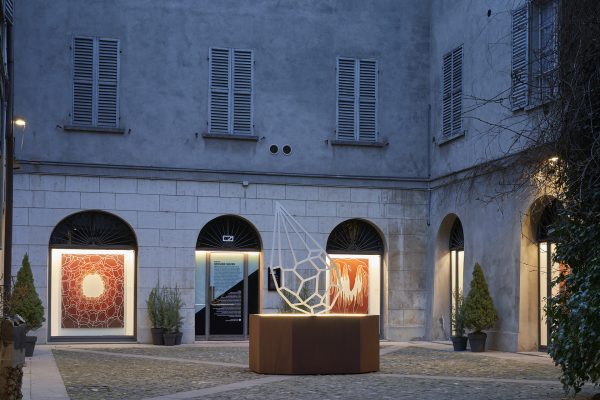 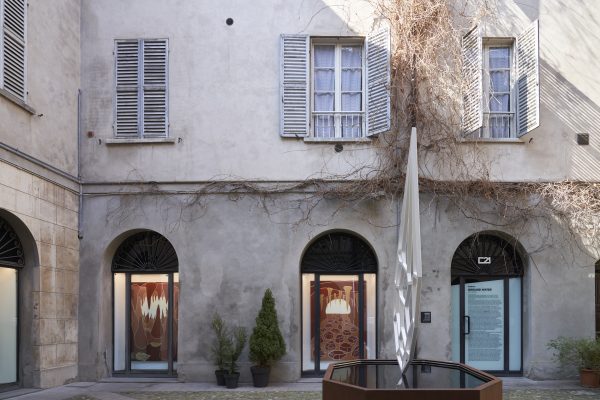 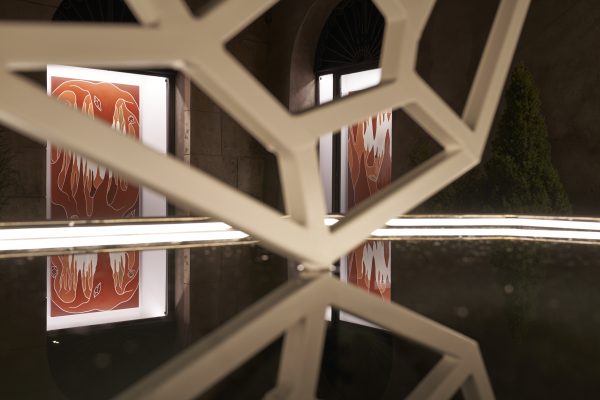 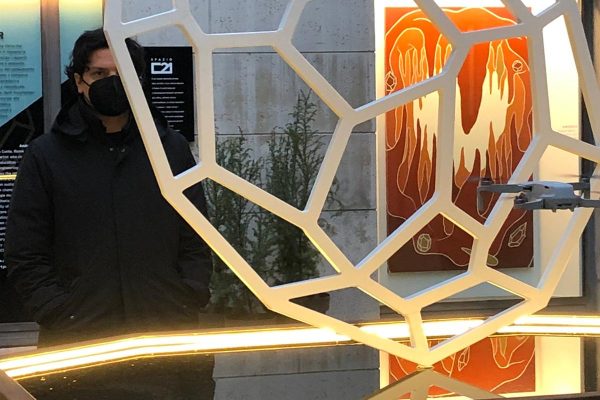 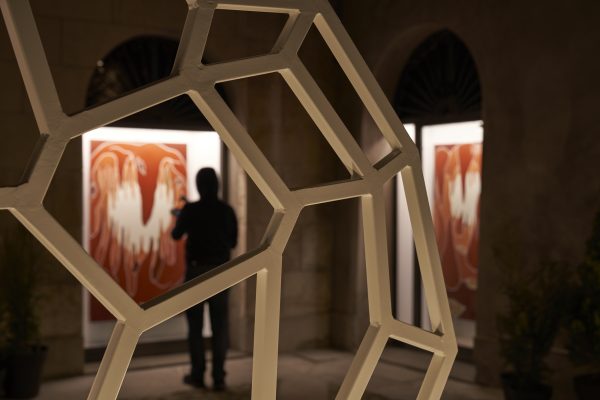 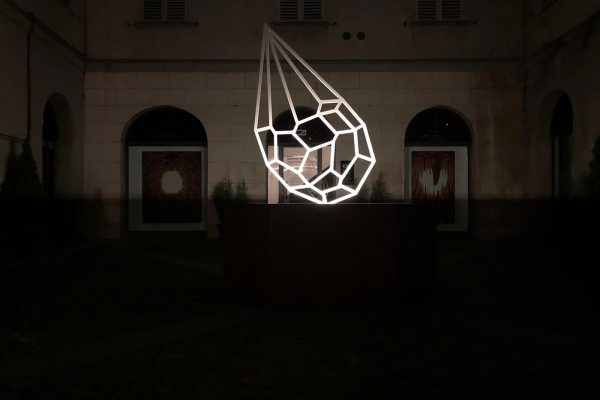 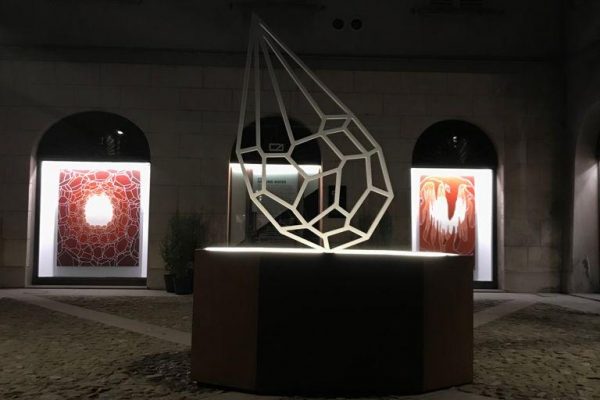 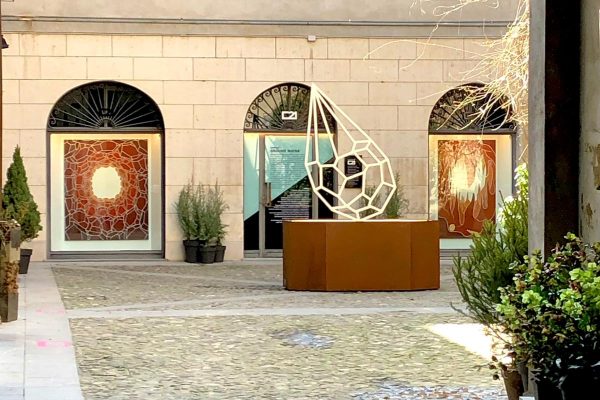 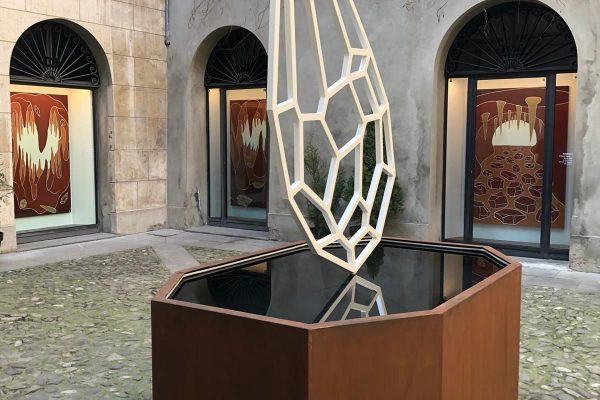 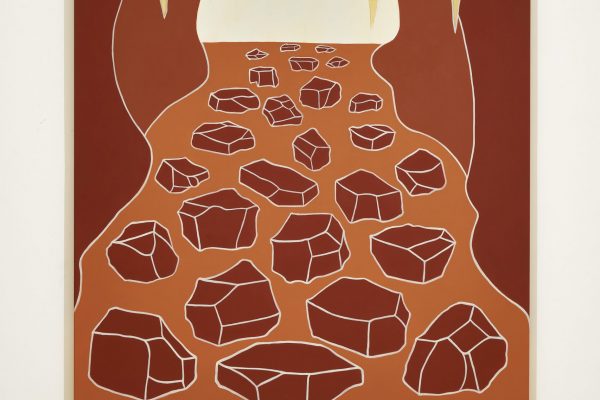 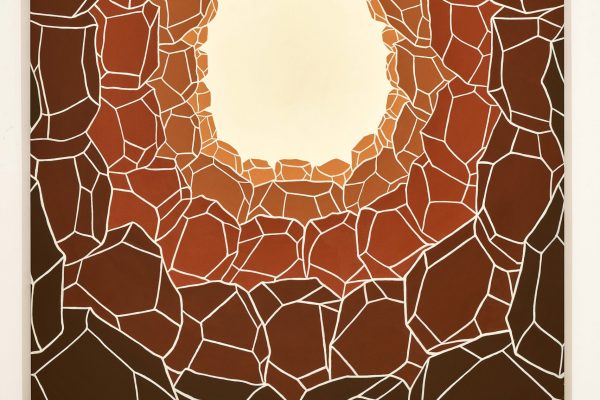 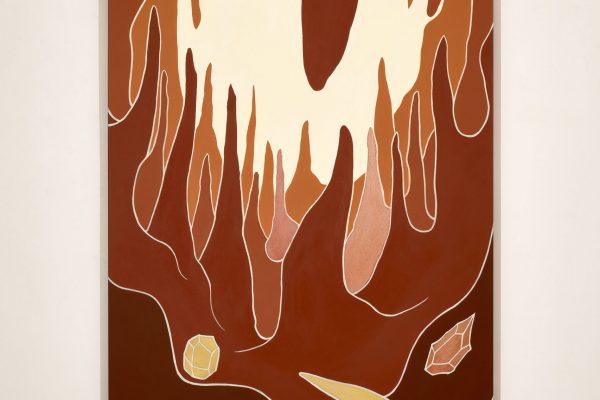 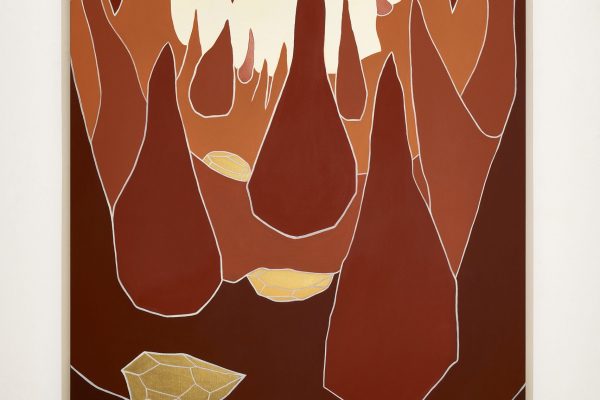 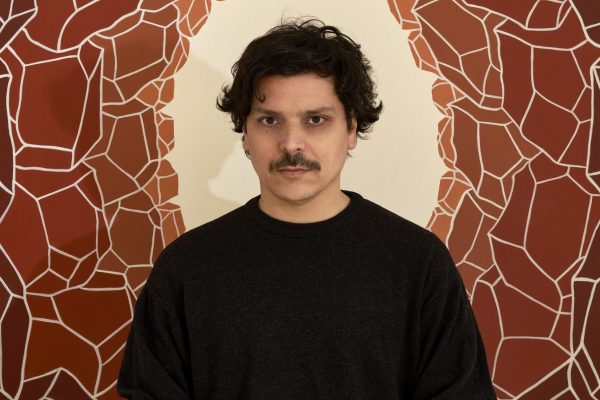