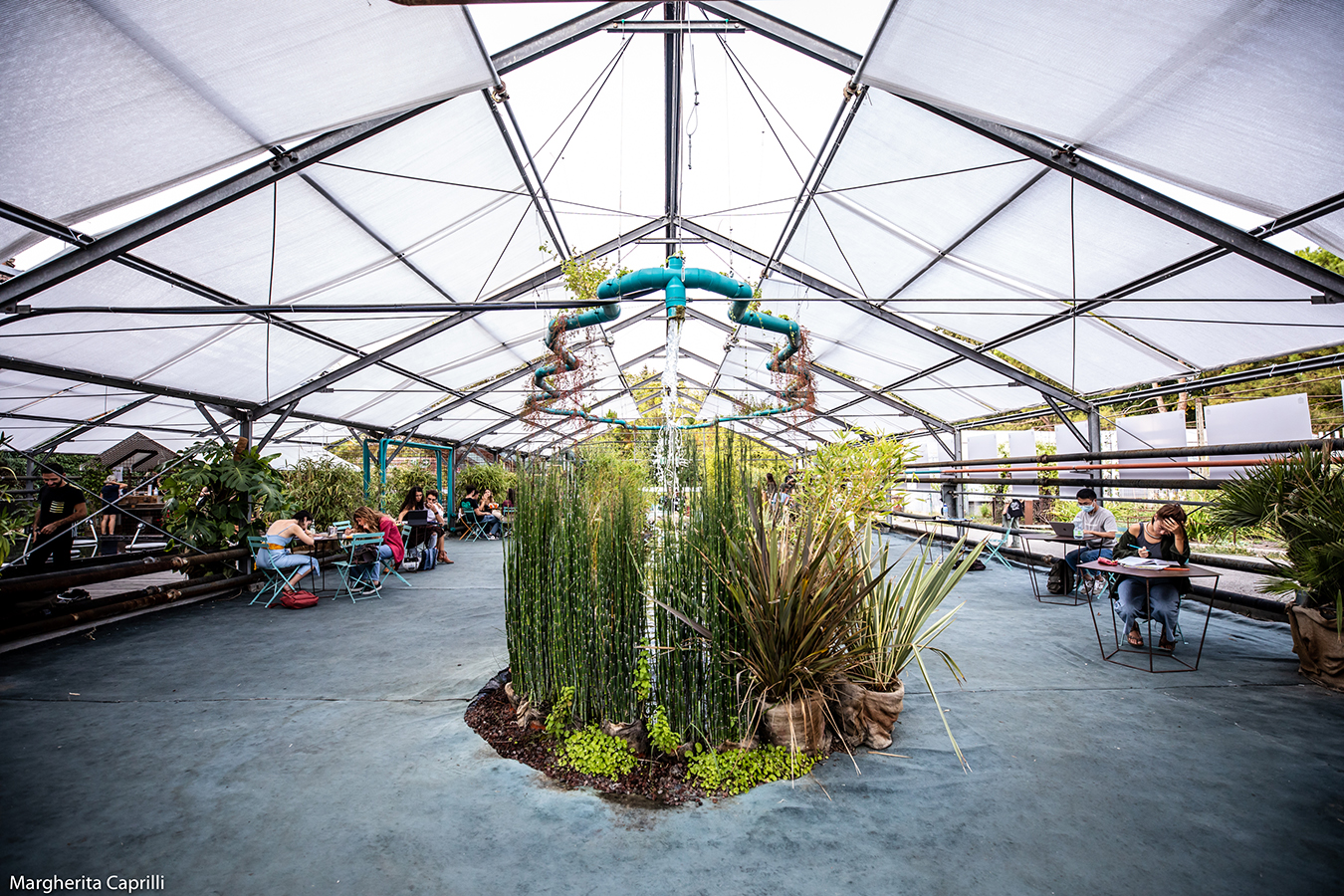 Being able to observe a complex ecosystem that is transformed while suspended in the air, following the water cycle, the changes in state of matter, the chemical-physical and biological exchanges that take place between microorganisms, plants and the atmosphere, this is the show, this is the work of art. Nature as Art – Andreco

Hydroponic Cloud is an installation designed specifically for the Serra Madre space by the artist Andreco – who had been waiting to be inaugurated in 2016 – consisting of two elements: a suspended installation and an aquaponic garden. The work will be officially inaugurated on May 26 with the presence of the artist in conversation with the director of the MAMbo – Museum of Modern Art of Bologna Lorenzo Balbi and other guests, but it will be possible to see a preview as early as May 7.

The installation is the result of research between art, science and technological green conceived and created by Andreco, with the support of Idroponica.it and Kilowatt, in May 2016 and never inaugurated due to the issue of access permits to the site.

Finally after five years the cloud comes to life and becomes a collective heritage. It consists of an experimental hydroponic system inside the Serra Madre: a sort of green cloud composed of more than 120 plants of different varieties, suspended in the air, which survive thanks to a particular hydroponic system that uses a certain volume of water. water through a closed hydraulic circuit. This system allows efficient water consumption and a limitation of waste: in fact, only the water used by the plants is integrated into the system. In addition, the evapo-transpiration process generated by the plants helps to mitigate temperatures and improve the quality of the air inside the greenhouse.
The hydroponic cloud, in addition to being the result of research on minimal form in the style of Andreco’s work, is also inspired by recent research in the scientific field on
Urban Green Technologies and the latest soilless cultivation techniques. In fact, it uses an NFT (Nutrient Film Technique) hydroponic system, a technique that consists in circulating a thin film of nutrient solution that constantly flows in contact with the roots of the plants.
The cloud overlooks a bio-lake made up of a vast range of aquatic plants, fish and lagoon microorganisms, created by Aquaponic Design, in collaboration with Andreco and with the support of Zanetti Piante 1961 and Anubias.

The bio-lake was dug below the work so that it reflected not only the perimeter geometries of the cloud, but also those of the greenhouse and the celestial vault immediately above, thanks to the play of light and the presence of water.
The 10,000-liter pond will host goldfish and guppies, which will be able to enjoy phyto-purification by the marsh plants positioned along the entire edge (eg Equisetum Tipha latipholia, Colocasia, Sarracenia) and submerged and floating aquatic plants such as Nin- phea rustica and Ceratophyllum.
Water connects heaven and earth: the pump positioned inside the pond, on the opposite side from the entry point to the greenhouse, picks it up and transports it inside the Hydroponic Cloud in two points. The first is intended to ensure the correct flow of water to the roots of the plants grown within the work; the second, on the other hand, with a greater flow rate, recreates a real waterfall that welcomes visitors at the entrance, refreshing the surrounding environment and returning back inside the pond.
The hydroponic cloud and the bio-lake make up a single closed and symbiotic ecosystem, a complex hyper-organism reminiscent of the sci-fi visions of Speculative Fabula- tion told by Donna Haraway in the book Chthulucene.
All around, the space will be enriched with greenery: many plants will be introduced, both on the ground and suspended. In addition, the greenhouse adjacent to the work will host, in addition to green walls and aerial plants, a relaxation area and a new point of the Vetro bistro. 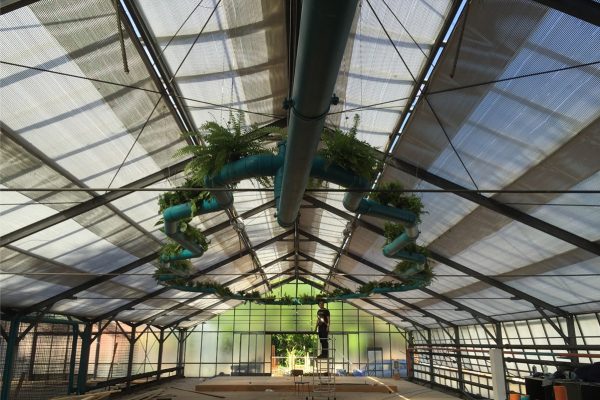 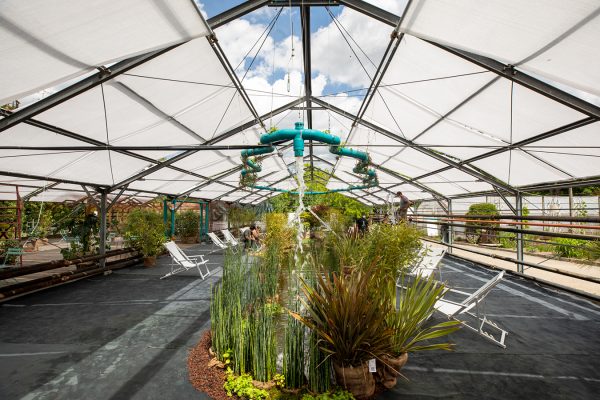 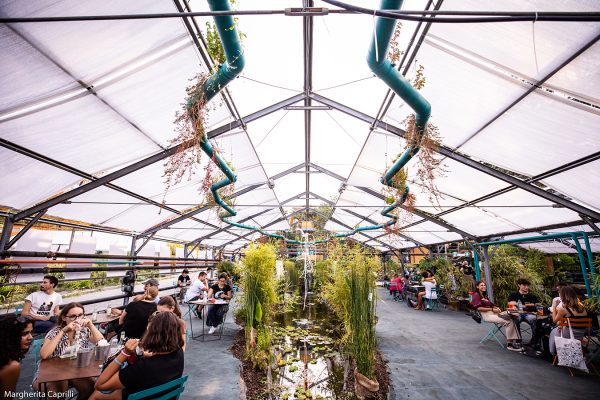 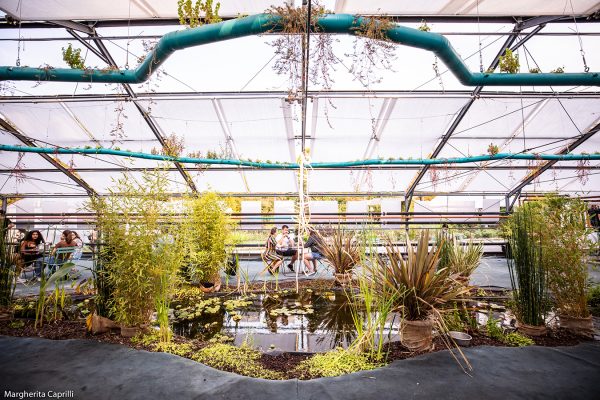 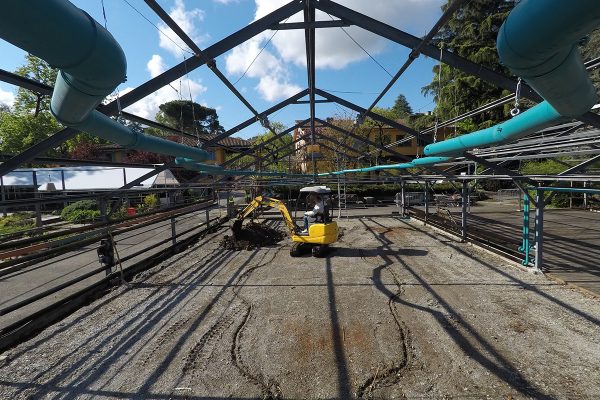