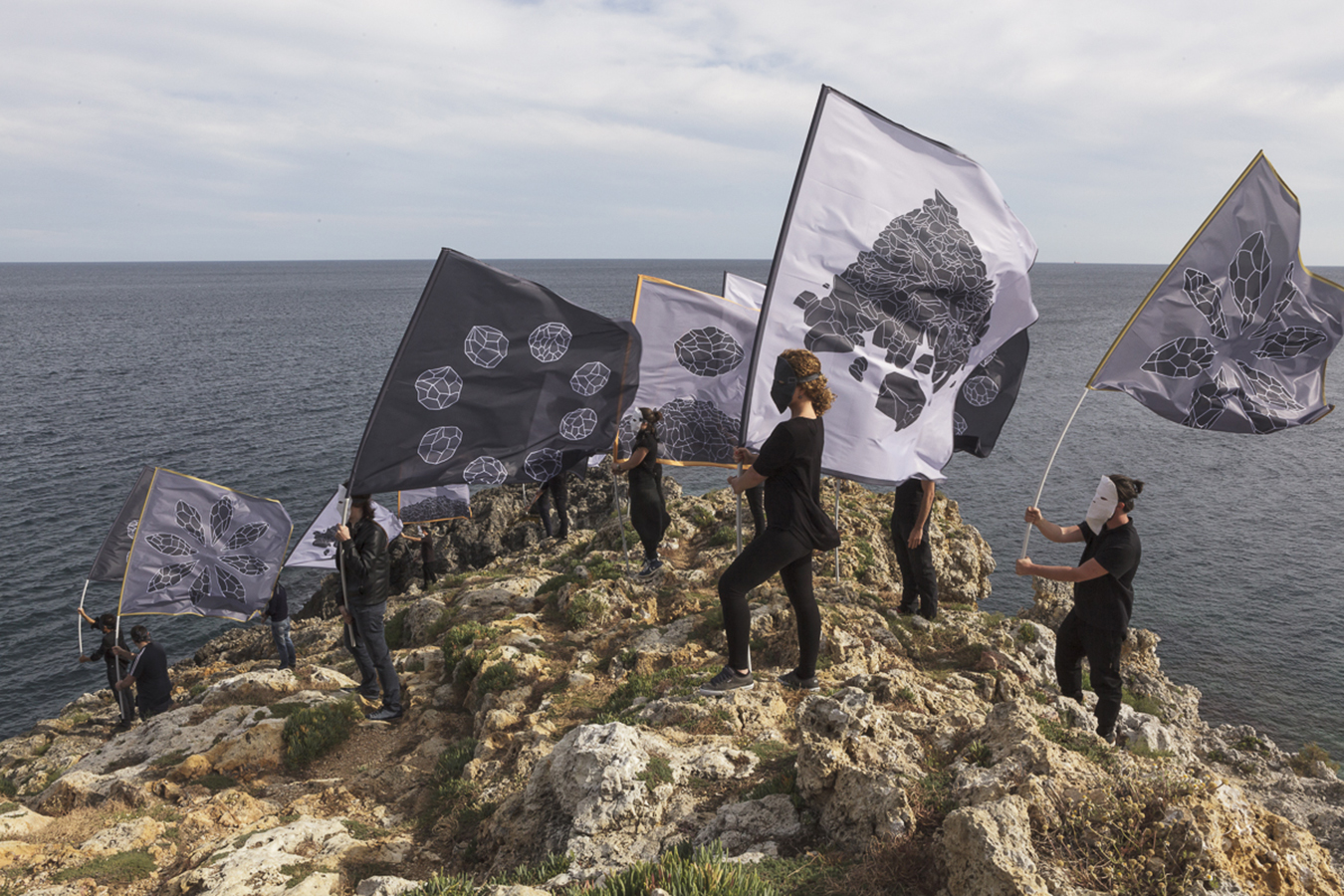 The stretch of coast from Santa Maria di Leuca to Otranto makes up the easternmost territory of Italy. In Leuca the cliff that enters the Ionian sea is the southern limit of Puglia and also the natural point of passage that gives way from the terrestrial to the sea. The project “Parade for the Landscape” is a public artwork made by Andreco that started from a investigation of the territory of Capo di Leuca, and manifests itself in a parade along the shoreline involving a group of citizen in collective actions. The project was realized with the participation of many persons from the local community, with the aims of enhance the natural landscape and in particular the environment and the geology of the area. The parade route, three miles, moves along the entire Gulf of Leuca, at sunset symbolically uniting Punta Ristola and Punto Meliso, linking symbolically the two seas. In this way the dilemma of the ancient legend of the siren Leucasia will be resolved, as she, in her jealousy, separated the two lovers Aristula and Melisso. Also inspired by the work of geographer Élisée Reclus, the parade is a reflection on “Finis Terrae” in Italy and the geographical and geological characteristics of this “extreme” area. One objective is the reevaluation of some aspects and perceptions tied to the boundaries of landscape. It aims to reflect on the meaning of limits, finding contradiction and differences between the idea of a natural boundaries, represented by the rocks of the cliffs that plunge into the sea, and political borders. The artist worked with residents, particularly with musicians from Santa Maria di Leuca, to form a group – a sort of imaginary tribe ready to march in defense of the environment and in the name of the local geology, crossing the city with flags representing the cliff rocks. The parade is a reflection on Leuca’s landscape and natural environment, on the meaning of natural boundaries, the political borders, and the public space in Leuca. The parade moved through critical zones of the city – abandoned areas, unknown terrain – and will end in front of the abandoned colony. The result was a merging of local traditions and the imaginative symbolism related to the landscape created by the artist. The success of the parade was given due the work and participation of all the people involved. The Landscape Parade” is a public art project and a collective performance. 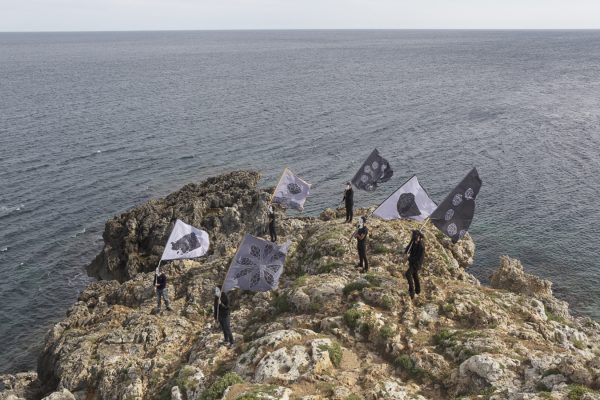 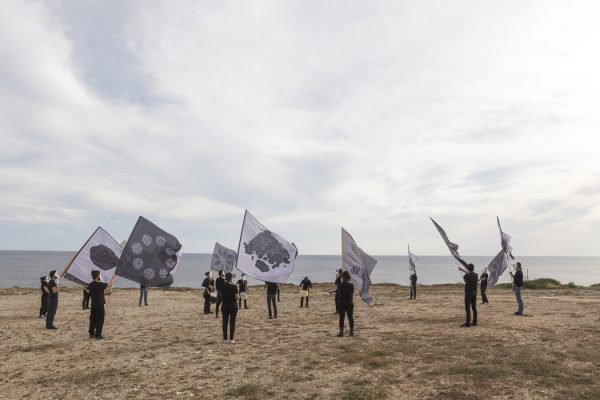 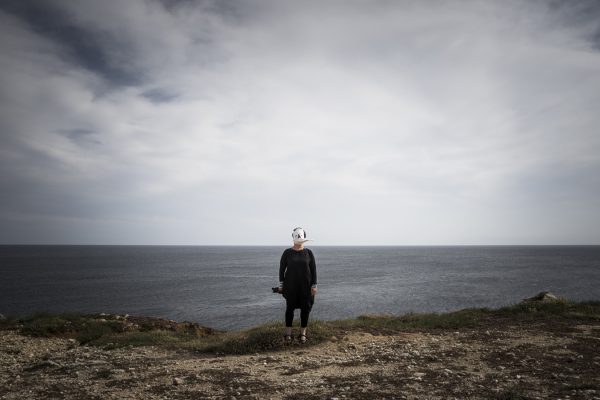 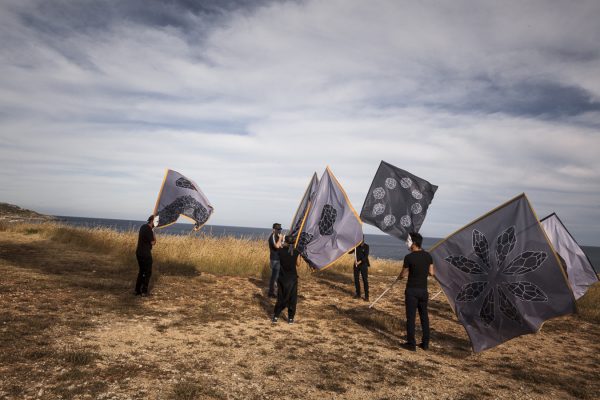 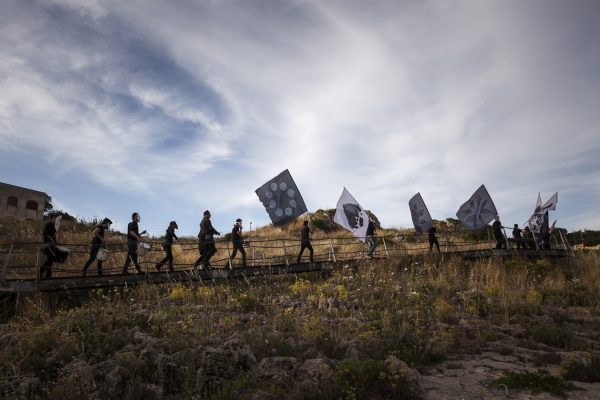 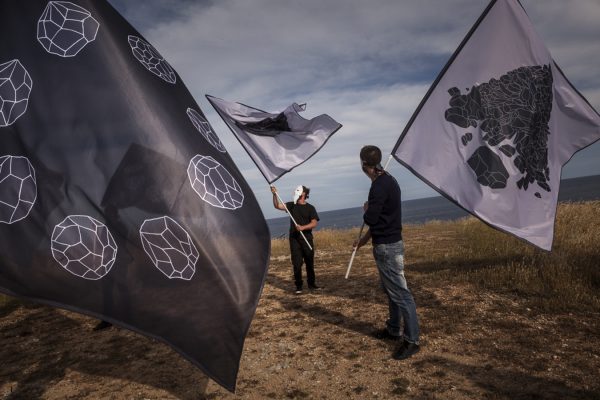 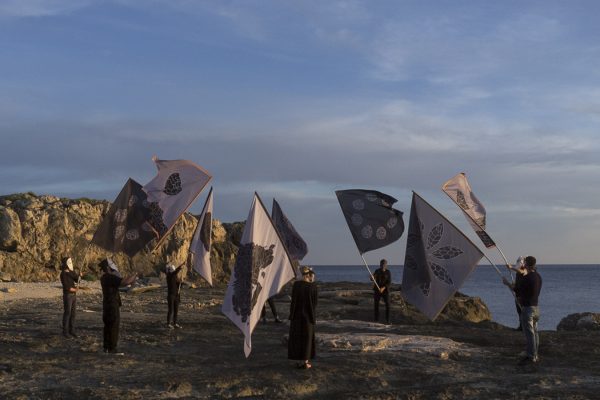 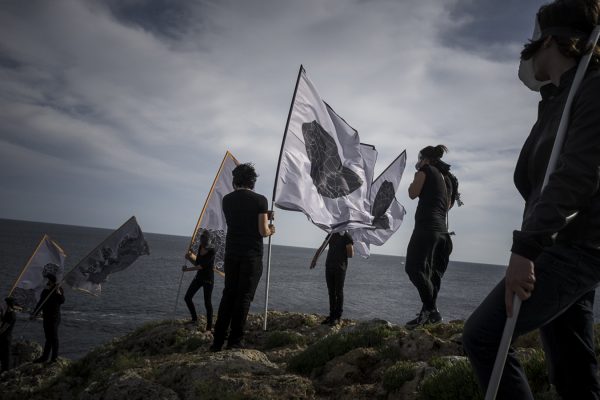 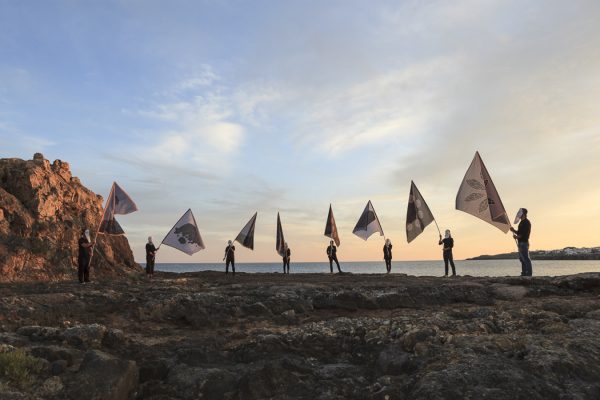 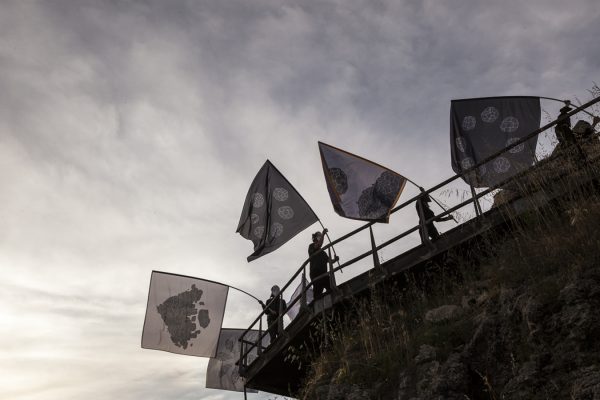 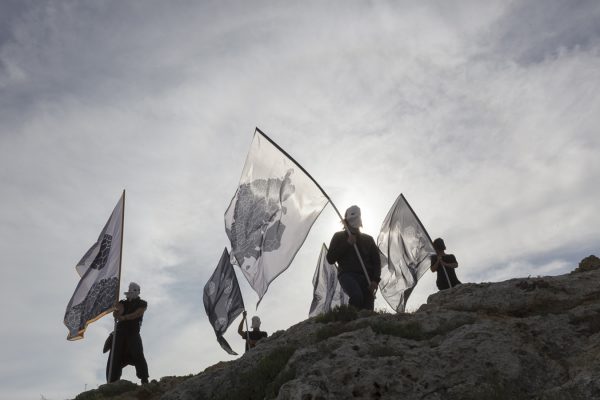 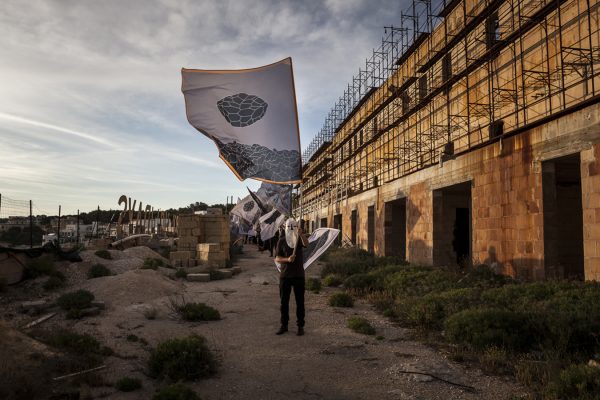 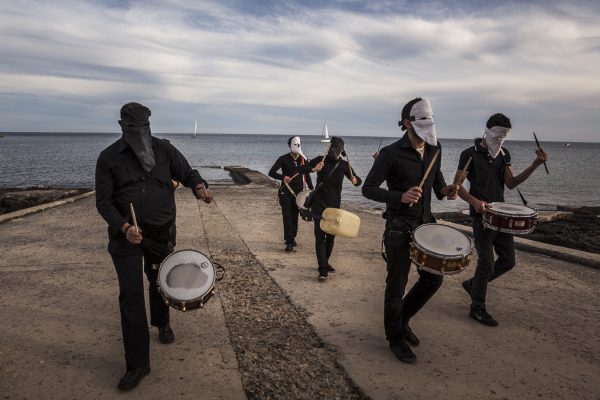 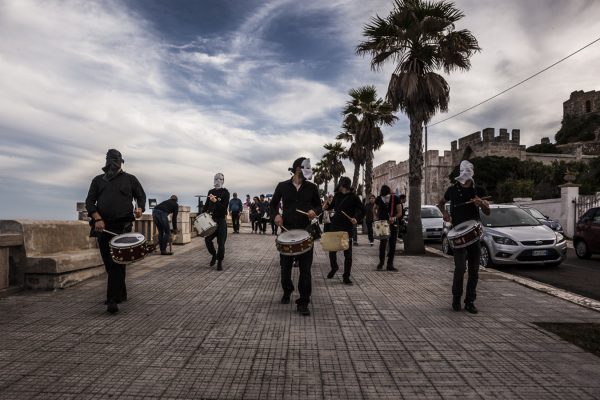 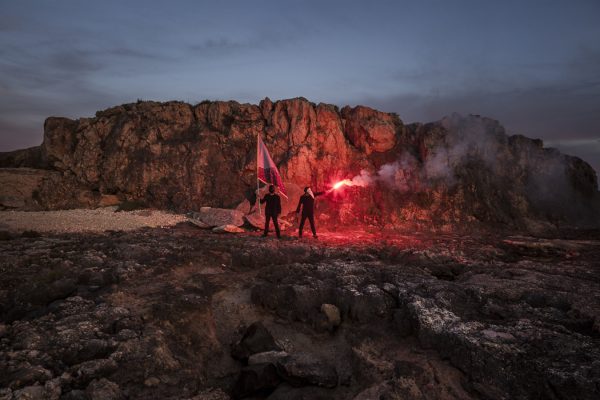 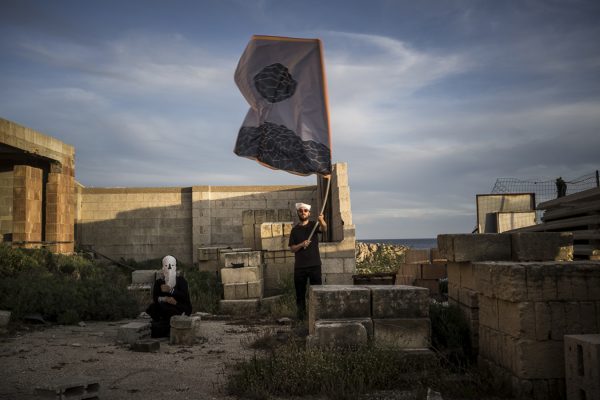 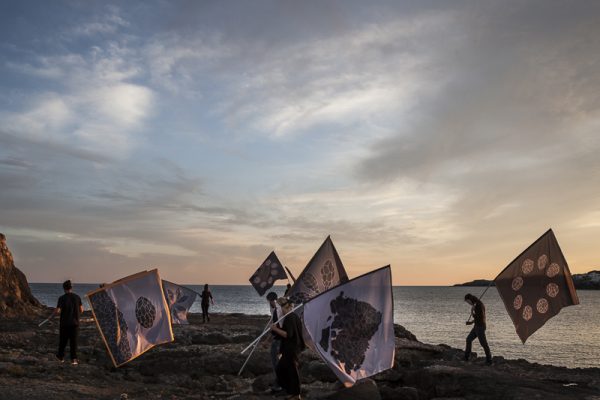 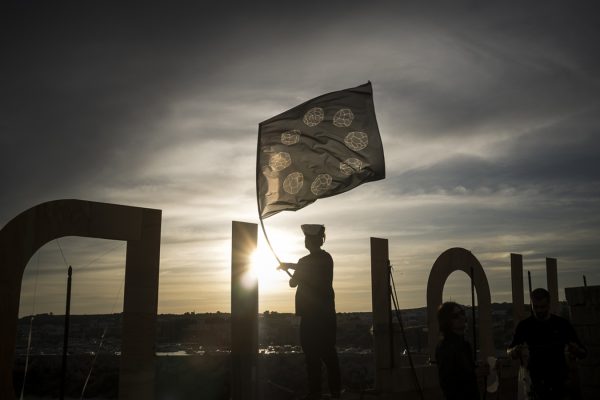