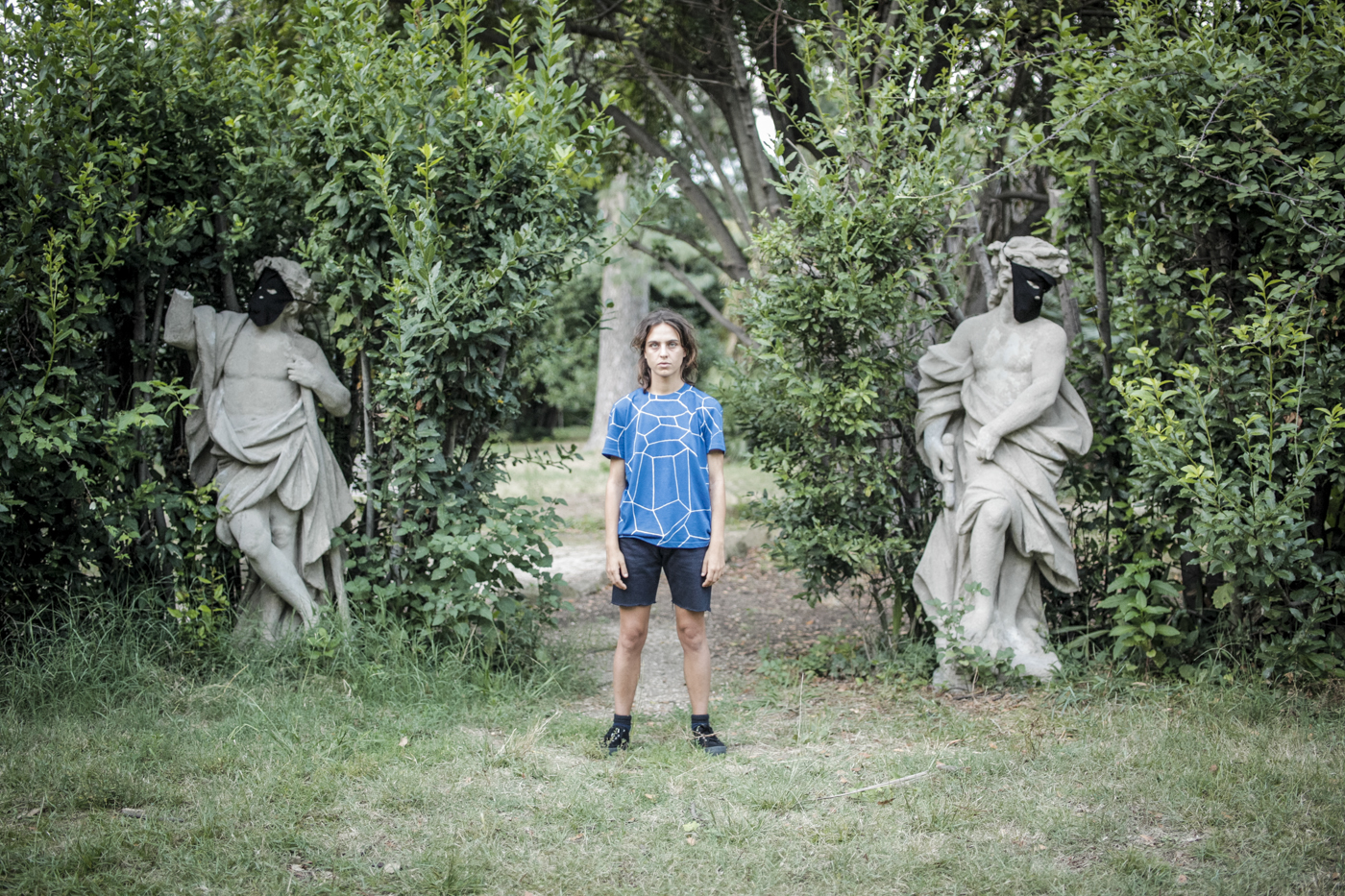 Water is a issue since long time. Water scarcity, drought and desertification are rising as Climate Change consequences. Furrina was the nymph of the water celebrated before the Roman Empire.

“Furrina will be either for everyone or for nobody”

The FURRINA performance, directed by the artist Andreco, took place in two replicas on 25 July at Villa Sciarra in Rome. FURRINA was created on the occasion of AQUAE, a project that includes artistic events, urban crossings and research on the theme of water and green spaces in Rome, from Villa Sciarra to the Aniene Valley, curated by Andreco, Sara Alberani, and Manuela Contino, made as part of the Roman Summer program. FURRINA, which takes its title from the nymph of the same name, archaic divinity protector of the waters and the sacred wood, is a performance designed specifically for the spaces of Villa Sciarra, which has created a path of strong visual and theatrical impact in symbolic places for the presence of sources, sculptural groups, mythological and historical narratives, on which the knowledge and rituals related to nature were based. FURRINA was not a glimpse into a poetic past, but an exhortation to a profound reflection on contemporary research in the field of the availability of water resources in relation to climate change. A message of political significance, an invitation to join forces to protect our habitat and its resources, to feel responsible for what is happening in our environment, in line with the artistic and scientific research carried out by Andreco through his work. and with the objectives of the project. The message of the FURRINA performance takes on even greater force in these torrid days of August when fires favored by drought and increasingly frequent heat waves occur in many areas of the planet. (In 2017 Andreco had done the ARVORES performance in Portugal dedicated to trees that burn in fires)

The leading actress of the performance was Ondina Quadri, who performed a monologue and various performative actions flanked by two dancers: Bianca Ranieri and Valeria Iudici.
The large sheets designed by ANDRECO with iconographic motifs related to water interacted with the mise en scene, symbolically recreating an uninterrupted stream of water that is once again present in those places.
The performance ends at the villa’s aviary, now unused, where the artist has created an installation consisting of a blue banner depicting a large fragmented drop with its recognizable distinctive feature. Here at the end of the reruns, an evanescent blue smoke signal appeared and slowly vanished into the sky. the installation will be visible until September 29th. 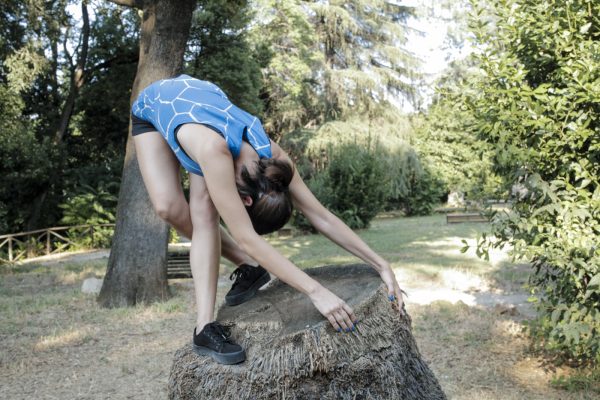 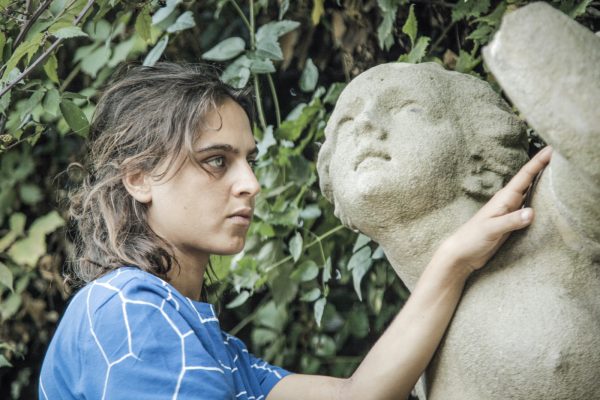 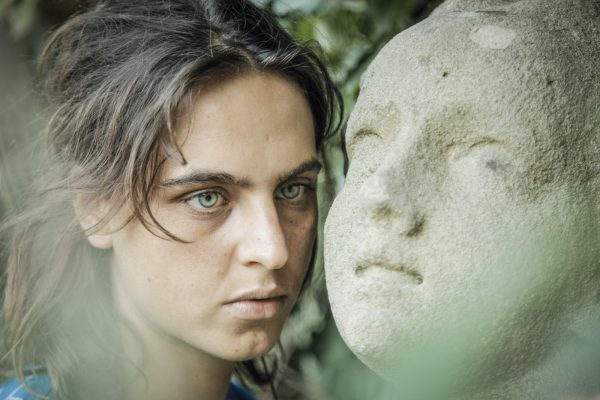 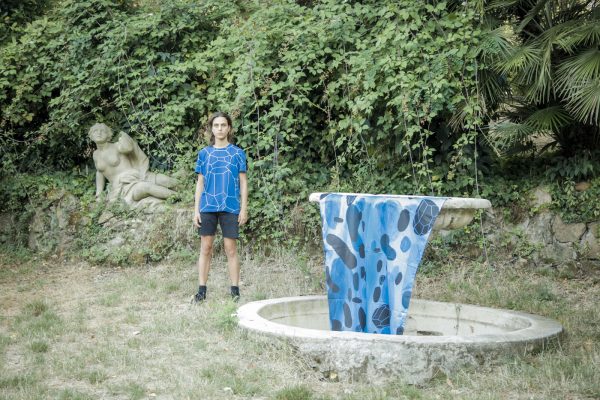 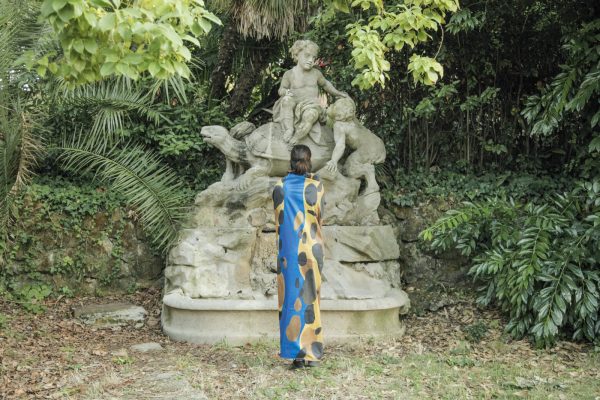 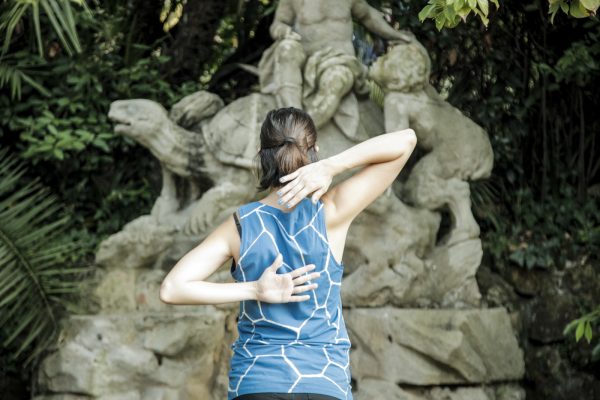 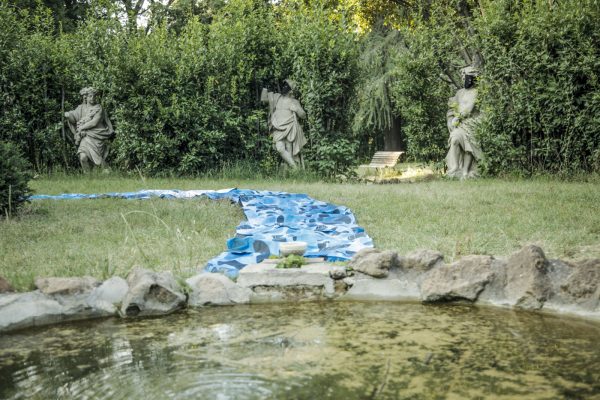 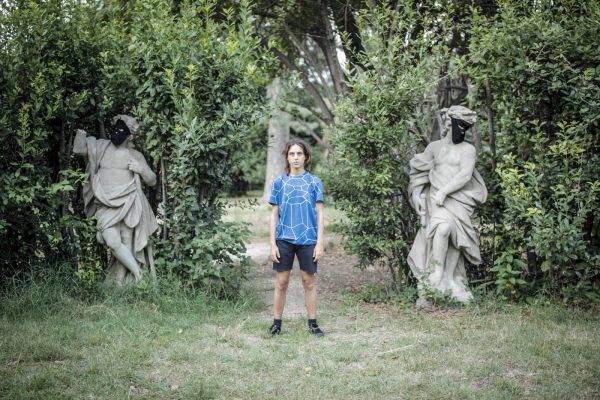 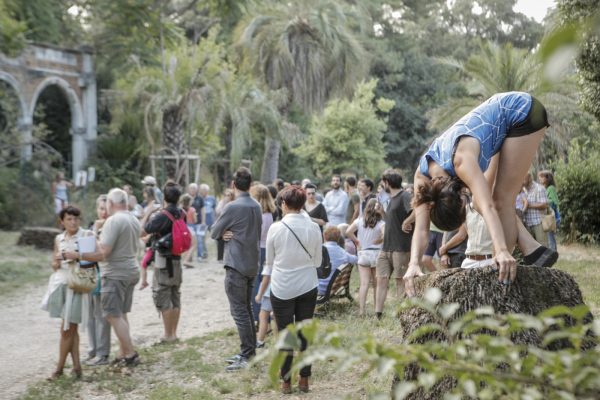 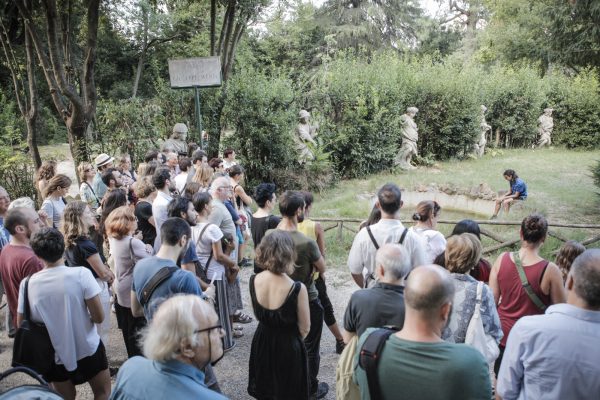 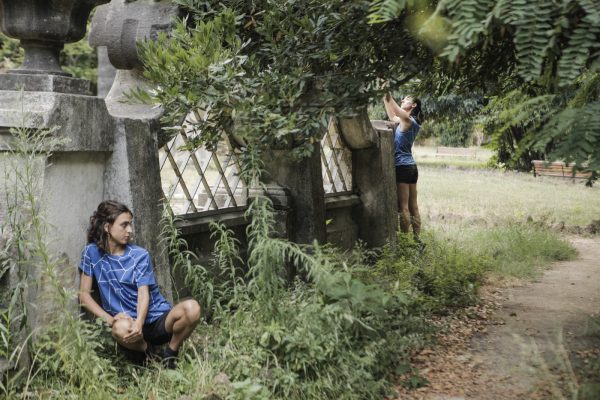 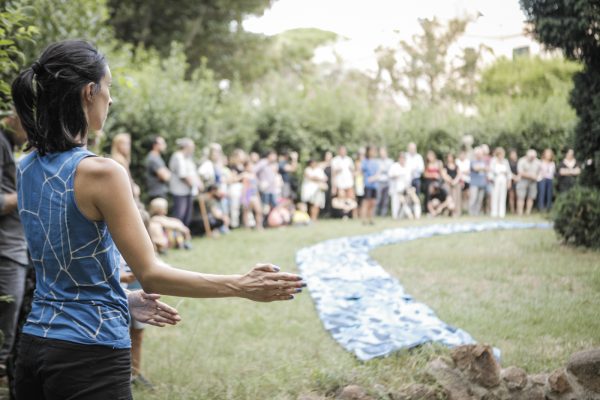 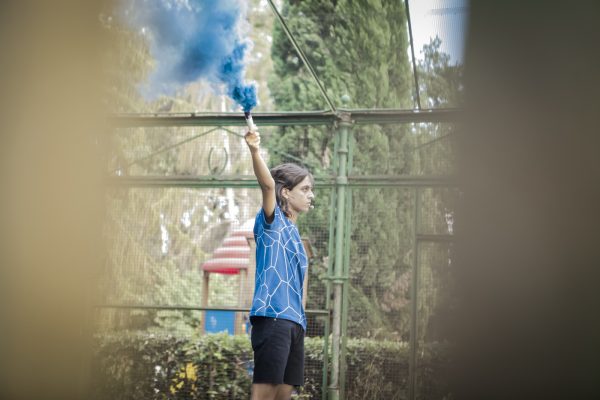 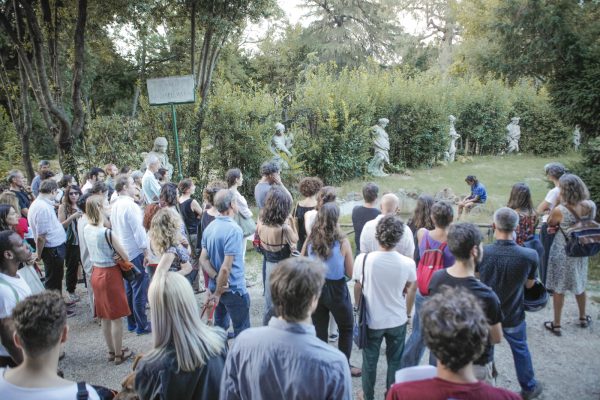 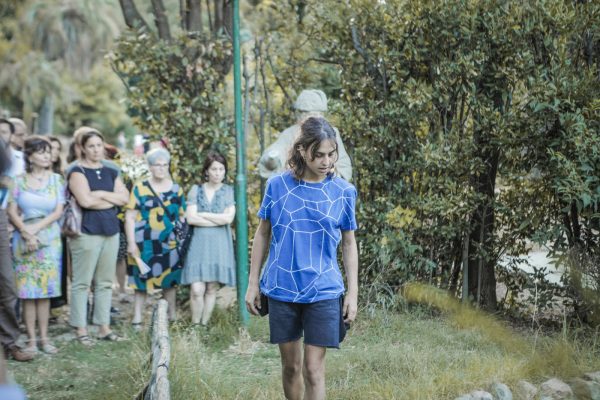 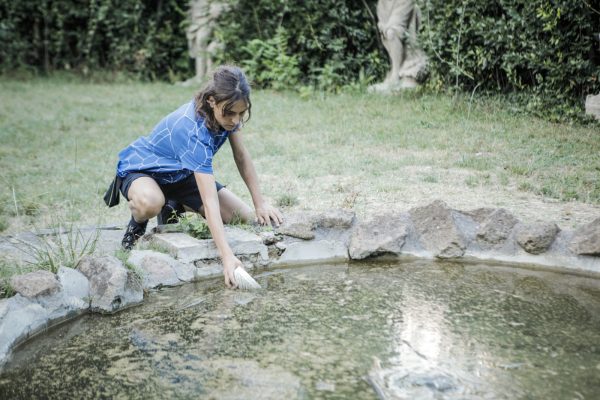 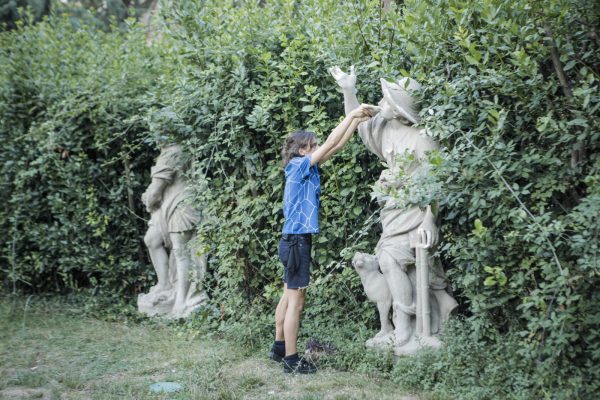 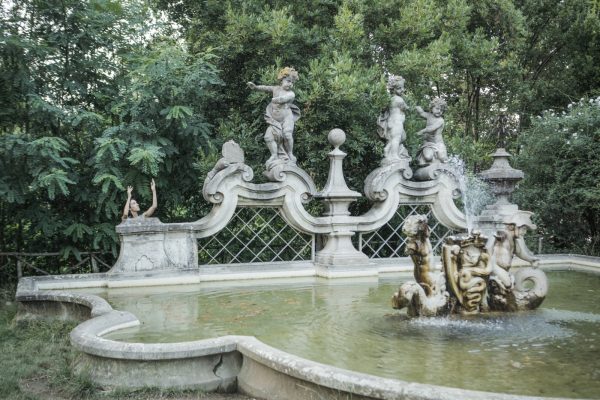 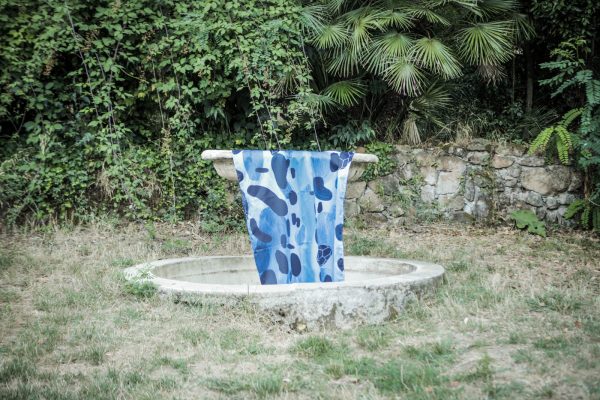 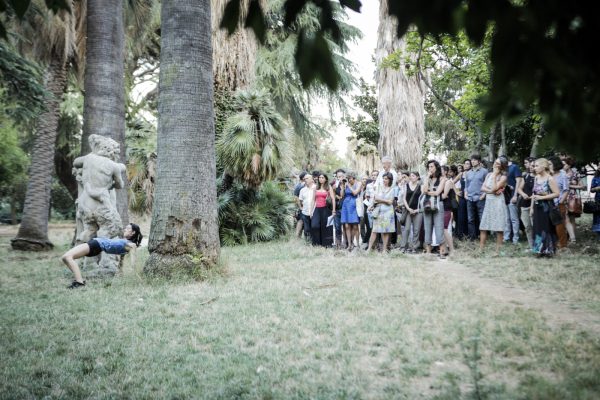 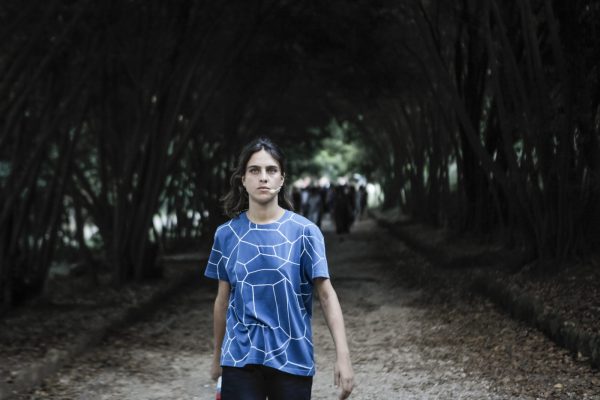