DROPS – THE STATE OF MATTER 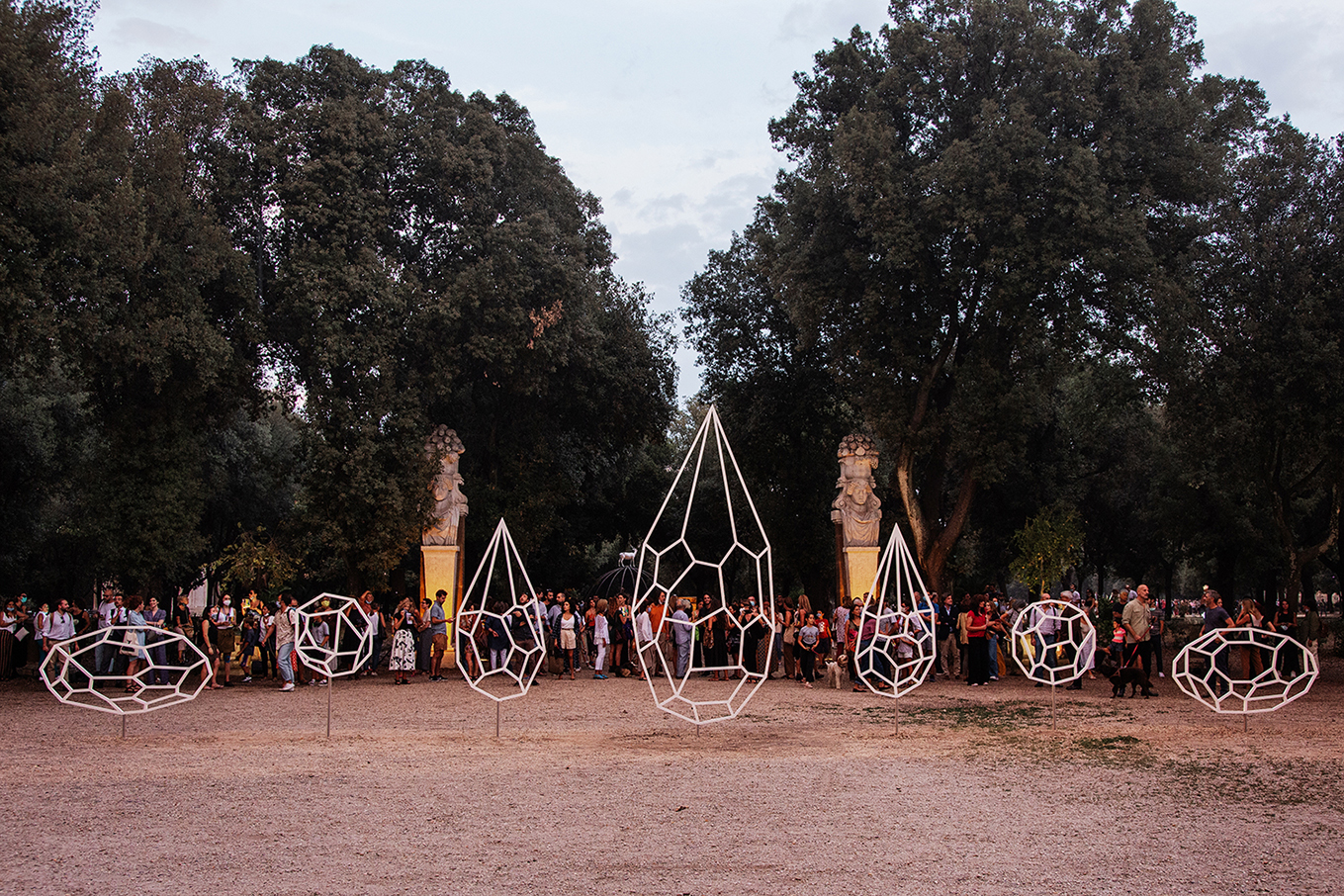 State of matter is a performance for six actors and dancers, designed specifically for the opening of the show Back to Nature, curated by Costantino D’Orazio, in Villa Borghese, Rome (2020). The performance has been inspired by Drops, a group of sculptures created by the artist Andreco, which has been set up at the Prospettiva del Teatro, a large semi-circular courtyard in the Parco dei Daini in the Villa.

“These sparkling droplets have passed through granite, limestone and clay; they were snow on the cold mountain, molecules of vapor in the cloud, white foam on the crest of waves; the sun, in its daily course, made them shine with the most brilliant reflections; the pale moonlight has made them vaguely iridescent; lightning turned them into hydrogen and oxygen, then with a new shock made these primitive elements flow into water. All the agents of the atmosphere and space, all of the cosmic forces, have worked in concert to constantly modify the aspect and the position of the imperceptible droplet; it too is a world like the enormous stars which roll in the heavens, and its orbit develops from cycle to cycle in a movement without rest.

I decided to set up the sculptures on the ground in the courtyard, while the fourteen pedestals are meant for the performers and the fruit trees. The performance is a complex reflection that is inspired by the space in which it takes place. It is a reflection on solids and voids, materials, on the changes to the states of the matter, transformations, on the deconstruction of the past, present and future conditions for dominion.

The performers get on the pedestals and take up the empty space that has been left by the statues. They turn into new sculptures in transformation, meant to overturn the whole idea of a sculpture and of a pedestal. The fruit trees turn into an artwork, in accordance with “Nature as Art”, one of the key practices of my poetics. There is a strong resemblance between this practice and the one introduced by the House of Borghese in their secret gardens, where the plants in the garden were shown to the visitors alongside with the paintings inside the villa. The plants too were considered artworks from their collection.

One can still see, on the wall around the Prospettiva del Teatro, which divides Villa Borghese from the today’s Bioparco, the engravings written in Latin in which the visitors are reminded that they should feel free to enjoy the fruit from the trees of the villa. Grapes, pomegranates and other fruit that emphasize the abundance and prosperity of nature, can be found in the fruit trees taken for this occasion and are also represented on the vases on the heads of the Mascheroni, the big sculptures situated at the entrance to the courtyard and along the eponymous street that runs alongside Parco dei Daini.

The performers carry out a dance that is both internal and external. The internal part begins in the moment that appears like physical stasis. However, during this part the soul of the performer is set in motion, wriggling away in order to break the physical limits of the material that traps it, granite, marble, iron, bronze, stone and the minerals it consists of, to dispose of the stasis and engage in the physical movement.

The performance is a work about form/matter, physiochemical and biological properties of materials and their transformation. Liberating oneself from the constraint is just the beginning. The performers start exploring the complexity of the space and the possibilities of movement. What happens now is that the Force of the Movement and the Energy generate the Potency which counteracts the Power of an iconic image of the classical sculpture as well as the hierarchy of a pedestal.

Following the liberation, the dancers cyclically generate forms, in and out of balance. These forms recall the concatenating atoms, the bonds between minerals and polygons in the sculptures I have created. The form brings itself to the state of utmost imbalance, to the limit state. The dancers find balance at the peak, the point of utmost imbalance before falling, and stay in that position, in which the potential energy is the highest and the kinetic energy is close to zero. Considering the infinitesimal perpetual oscillation of muscles and nerves as well as that of the cells, it never reaches the zero mark. I have always been interested in that particular point and moment of a performance, the condition of risk prior to the failure, the moment before the liberation of the Kinetic Energy and the decrease of the Potential Energy that follows.

This tension generated by the potential energy at its highest is the key to the performance. It is a destructive force when it comes to the classical symbol of sculpture, where the sculpture represents dominion, subjugation, hierarchy, exploitation, colonization, proselytism.This performance is meant to deconstruct the dominion, its images and visual representations. The performers fall from the pedestal, lie at its feet. The scene recalls the statues of colonizers and dictators removed by the movement Black Lives Matter.

The track Bassae by Mai Mai Mai stops, the ordeal and the opposition between the forces ends. The performers stand up, liberated from the sculpture: the simulacrum comes to life similarly to the myth of Pygmalion, and observes the base where it was before abandoning it.

The action represents the descent from the pedestal in all the possible senses. In the discussions within the BLM movement, the necessity to “destroy the pedestals rather than the statues” has emerged. What does it mean to destroy pedestals? It means to oppose a complex system of rules and procedures that allows for the forms of dominion and authority, of power defined by the hierarchy that generates inequality, injustice and suffering.

Observing the movements of the performers during the process of liberation from the simulacrum, one can notice a certain tension in the direction of the trees, the nature, the desire to touch them, to get closer to the organic matter. After leaving the pedestal the performers head towards the fruit trees, the only elements that deserve a pedestal, in order to be saved from the anthropic destruction.

What I am interested in showing here is not the tree itself, nor its fruits, but a process: during the three months of the exhibition the fruit will ripen, the buds will bloom and in some cases the leaves will turn yellow and fall.

This operation, due to the theorem “Nature as Art”, becomes a key element, similarly to the work I created for the show Nomadic Landscape that took place at Adiacenze, a space in Bologna, in 2013-2014 and in which I wanted to show the process of blooming of a linden tree.

The performers observe the tree and its fruit with fascination and then head towards the sculptures, Drops, in the center of the courtyard. The group of sculptures, Drops, recalls the process of the fall of a drop of water and the alteration of the shape during that process.

Villa Borghese has been designed with great attention to the water, towards the surface flows of the rainfall and the way in which it would channel towards the Tiber.

Water is central for this work, which is meant to be a tribute to its importance for the city and for the life of the plants and the villa. The performers are aware of the value of water, they leave the pedestals behind in order to get down and approach the sculptures.

The performers study the sculptures and reproduce their forms. Exploring the voids and solids, they occupy the negative space around the sculptures. The forms and chemical, physical and biological bonds of the matter come to life one more time. The actions of performers are individual for now, but this encounter around Drops will soon transform into a collective action. The performers realize that there are other beings who are experimenting with forms and begin to implement the bonds that they had only tested until now.

They run together, they conspire, they breathe together and head towards the wall behind the sculptures. That’s when they begin to interact with the space.

The audience’s point of view is two-dimensional. For the viewer, the performers are shapes in space that interact with the partition of the vertical plane that the elements of the facade constitute. A facade with a central niche that reinstates a triangle shape elongated at the ends, similar to that of the sculptural group Drops.

The individual exploration in which the body merges with the architecture becomes collective when the performers come together and begin to implement the bonds that transform them from a body to a hyper-body.  Hyper-body is a practice that has always been present in my performative language, and is composed of bodies or flags that generate complex, sci-fi, super-organisms. Like the sculptural group Drops the bodies generate bonds to compose ultra-forms.

The simulacrum “it is the truth which conceals that there is none”, according to Baudrillard, frees itself and becomes a hyper-connected organic form, a mirror silhouette of the Drops installation. The “thin layer that envelops things” of Lucretius in De Rerum Naturae, this time is an expression of life, water and potency against power. Counterpower. 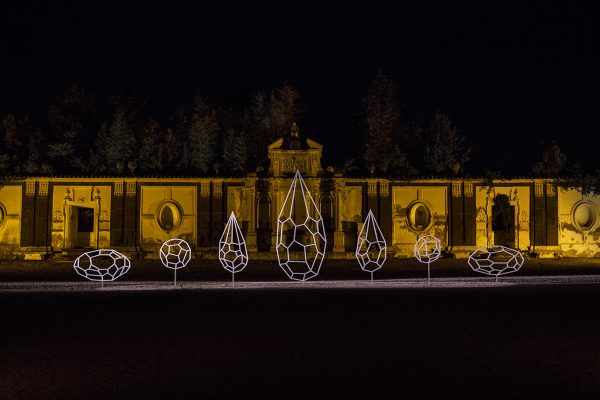 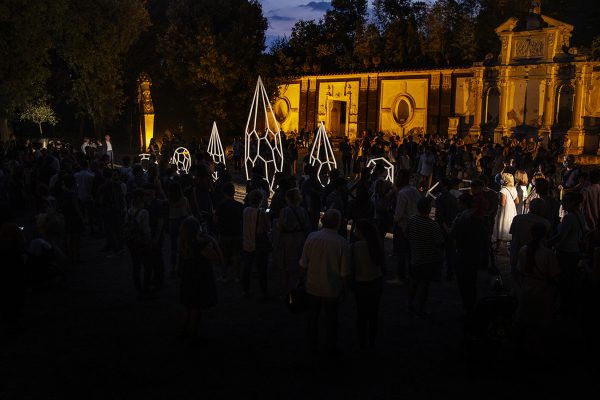 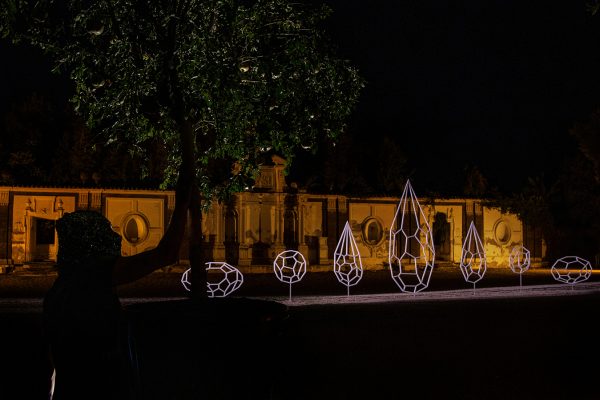 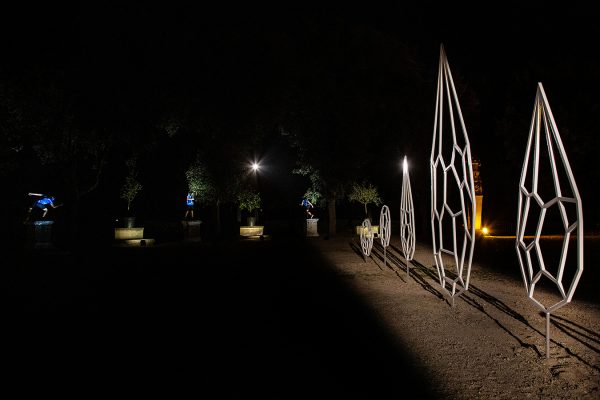 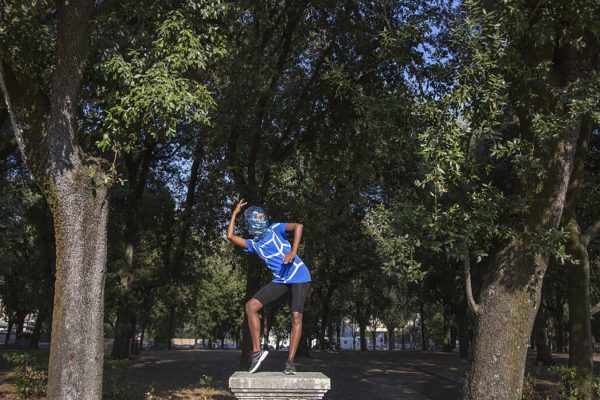 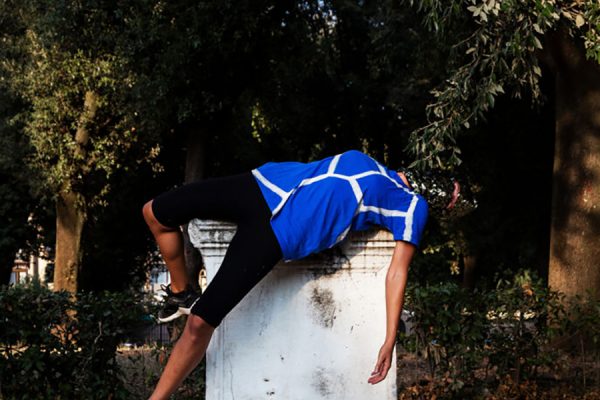 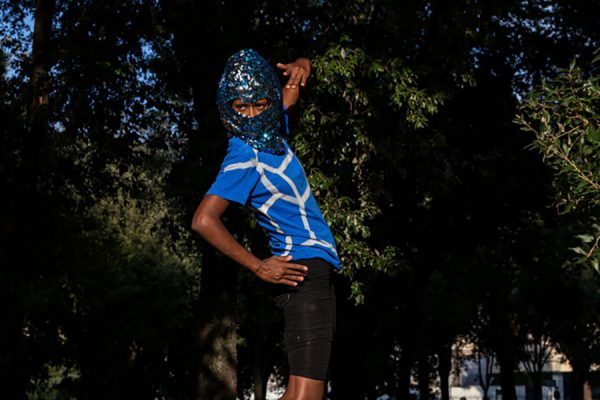 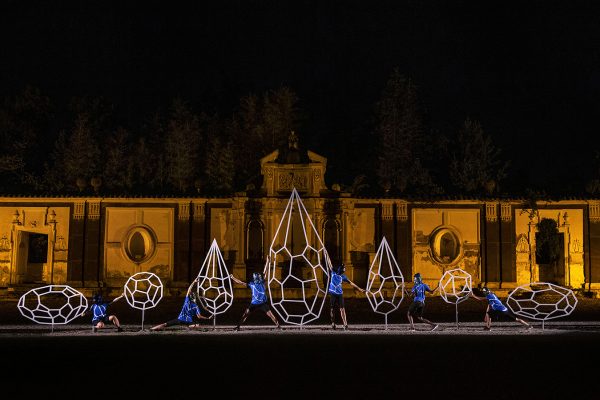 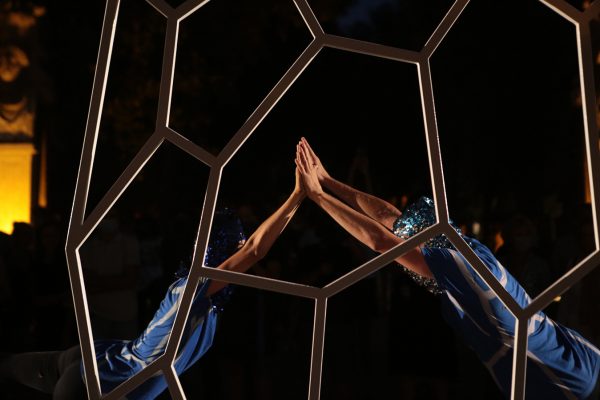 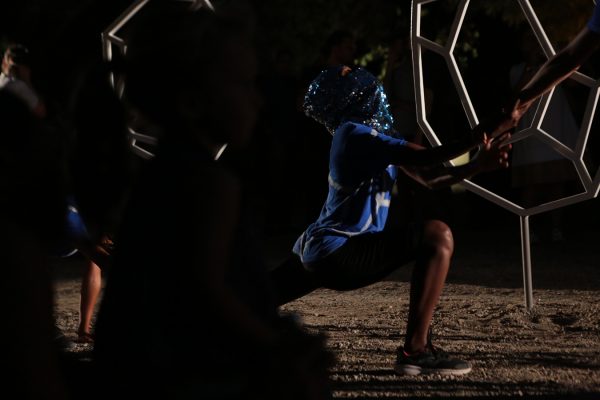 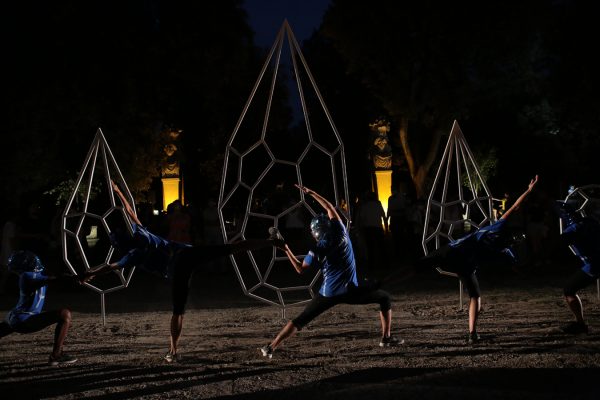 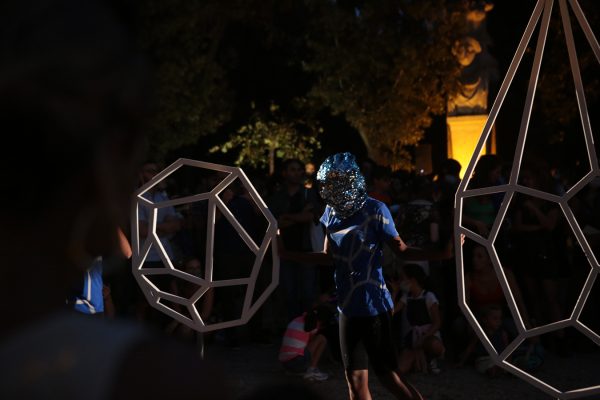 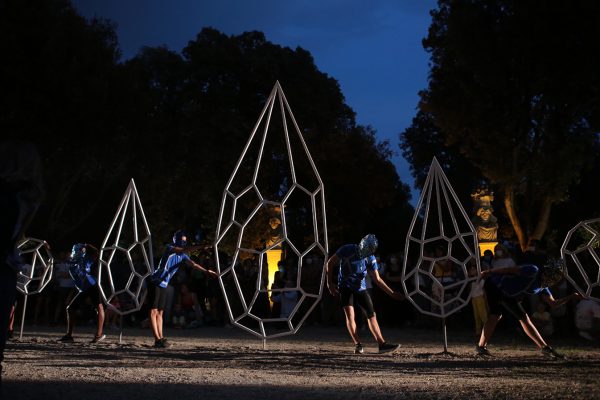 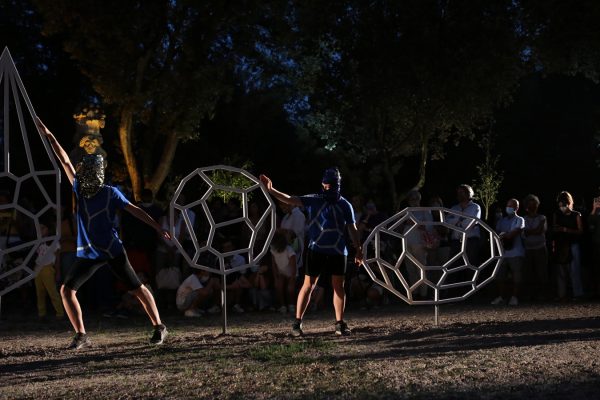 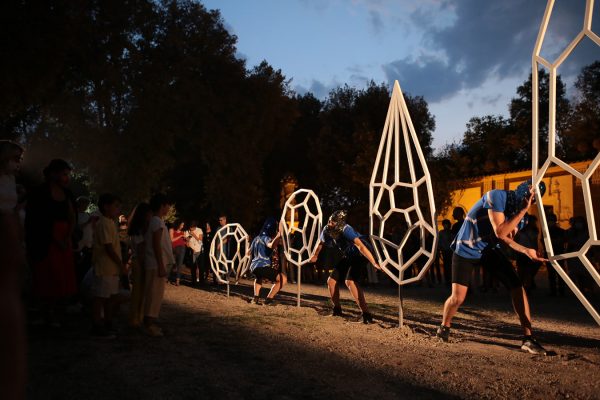