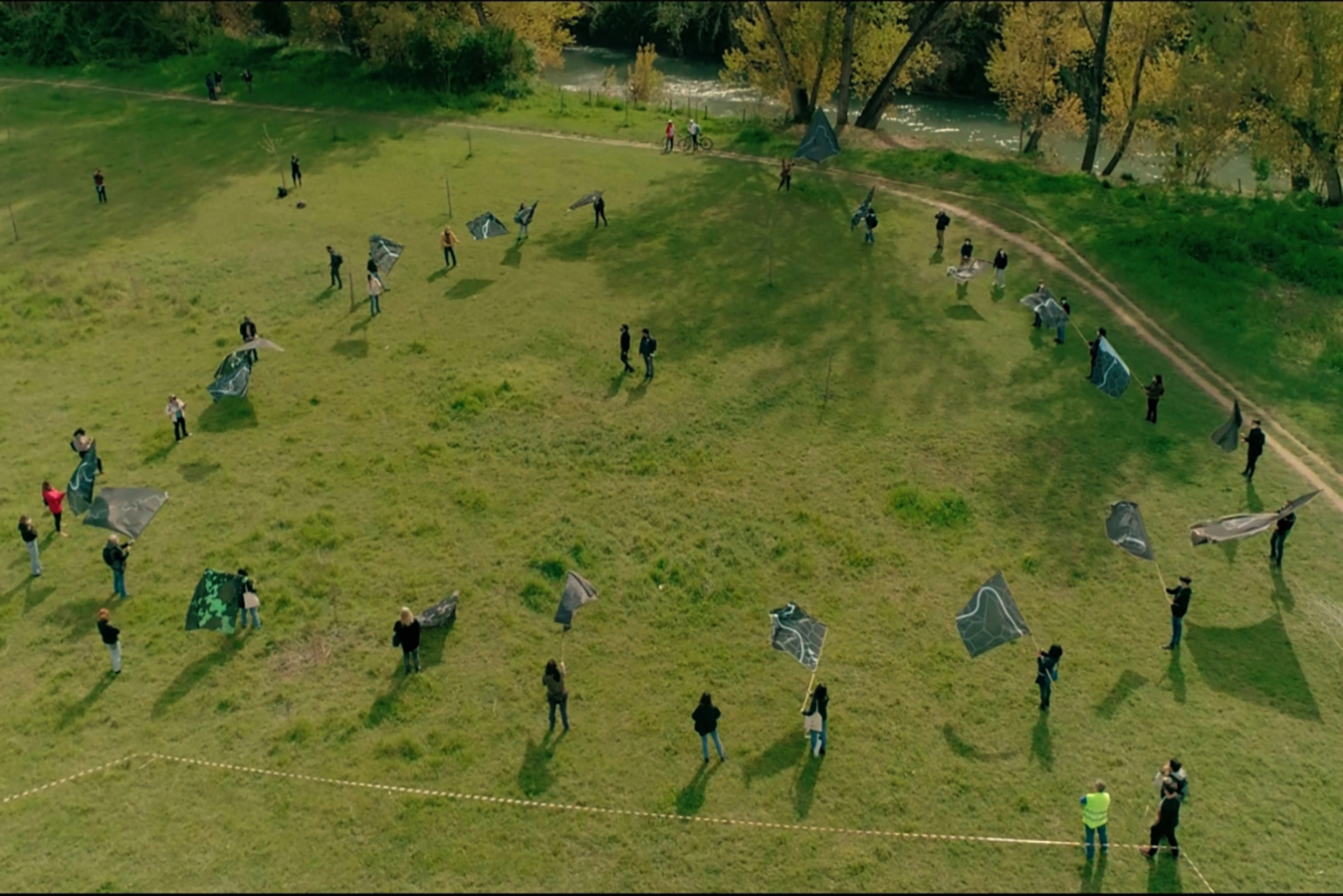 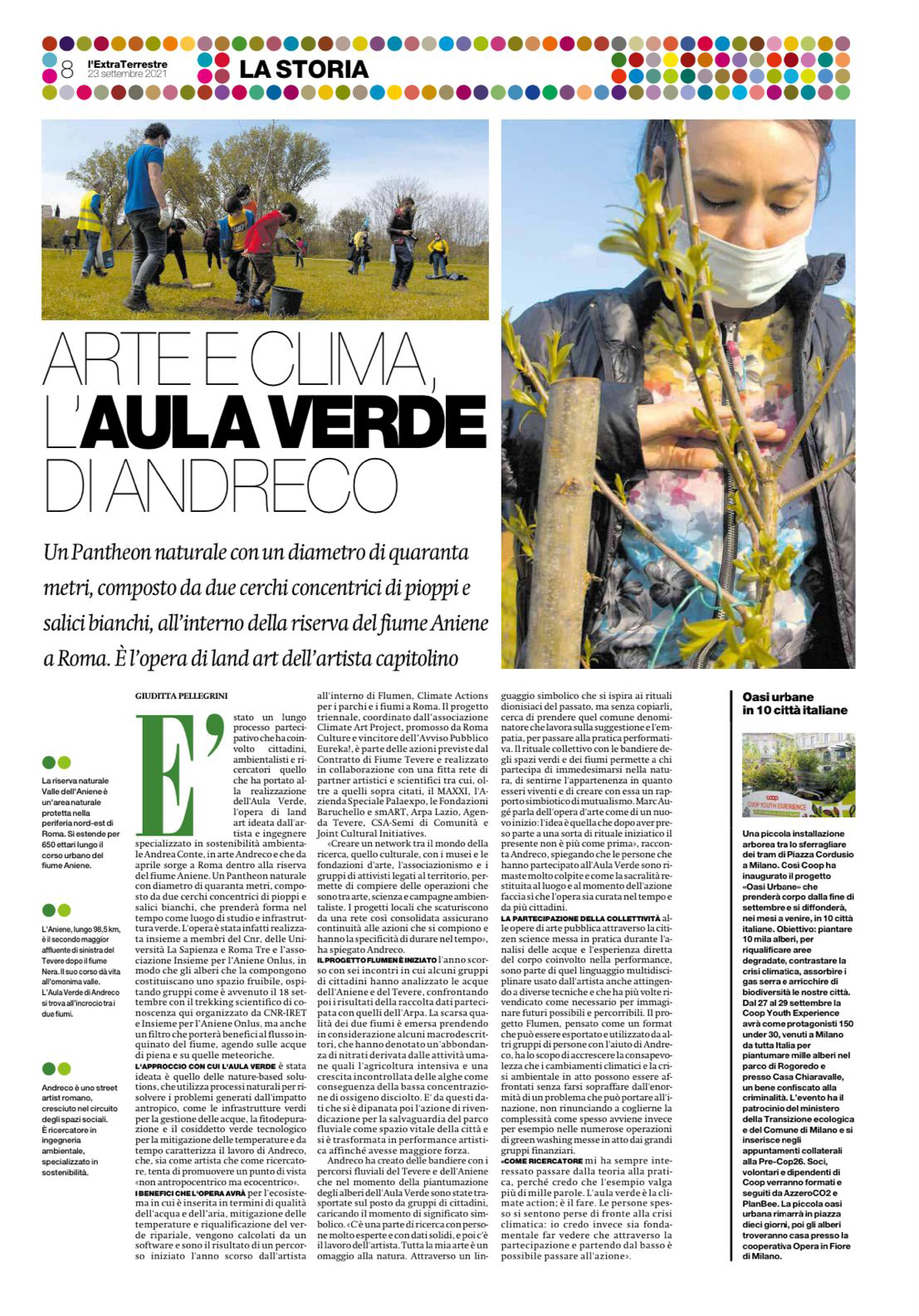 A natural Pantheon with a diameter of forty meters, made up of two concentric circles of white poplars and willows, within the reserve of the Aniene river in Rome. It is the land art work of the Capitoline artist

It was a long participatory process that involved citizens, environmentalists and researchers that led to the creation of the Aula Verde, the land art work conceived by the artist and engineer specialized in environmental sustainability Andrea Conte, aka Andreco and who gives April rises in Rome inside the Aniene river reserve. A natural Pantheon with a diameter of forty meters, composed of two concentric circles of white poplars and willows, which will take shape over time as a place of study and green infrastructure. The work was in fact carried out together with members of the CNR, of the La Sapienza and Roma Tre Universities and the Insieme per l’Aniene Onlus association, so that the trees that compose it constitute a usable space, hosting groups as happened the September 18 with the scientific trekking of knowledge organized here by CNR-IRET and Insieme per l’Aniene Onlus, but also a filter that will bring benefits to the polluted flow of the river, acting on flood and rainwater.

The approach with which the Green Room was conceived is that of nature-based solutions, which uses natural processes to solve the problems generated by anthropic impact, such as green infrastructures for water management, phytodepuration and the so-called green technology for the mitigation of temperatures and has long characterized the work of Andreco, who, both as an artist and as a researcher, tries to promote a “not anthropocentric but ecocentric” point of view.

The benefits that the work will have for the ecosystem in which it is inserted in terms of water and air quality, temperature mitigation and redevelopment of the riparian greenery, are calculated by software and are the result of a process that began there. ‘last year by the artist in Flumen, Climate Actions for parks and rivers in Rome. The three-year project, coordinated by the Climate Art Project association, promoted by Roma Culture and winner of the Eureka! Public Notice, is part of the actions envisaged by the Tiber River Contract and carried out in collaboration with a dense network of artistic and scientific partners including , in addition to those mentioned above, MAXXI, the Palaexpo Special Company, the Baruchello and smART Foundations, Arpa Lazio, Agenda Tevere, CSA-Semi di Comunità and Joint Cultural Initiatives.

“Creating a network between the world of research, the cultural one, with museums and art foundations, associations and activist groups linked to the territory, allows you to carry out operations that are between art, science and environmental campaigns. The local projects that spring from such a consolidated network ensure continuity to the actions that are carried out and have the specificity of lasting over time “, explained Andreco.
The Flumen project began last year with six meetings in which some groups of citizens analyzed the waters of the Aniene and the Tiber, then comparing the results of the participatory data collection with those of the ARPA. The poor quality of the two rivers emerged by taking into consideration some macro descriptors, which denoted an abundance of nitrates derived from human activities such as intensive agriculture and uncontrolled algae growth as a result of the low concentration of dissolved oxygen. It is from these data that the claim for the protection of the river park as a vital space of the city was then unraveled and it was transformed into an artistic performance so that it would have greater strength.

Andreco created flags with the river paths of the Tiber and the Aniene which, when the trees in the Aula Verde were planted, were transported to the site by groups of citizens, loading the moment with symbolic meaning. “There is a part of research with very experienced people and solid data, and then there is the work of the artist. All my art is a tribute to nature. Through a symbolic language that is inspired by the Dionysian rituals of the past, but without copying them, he tries to take that common denominator that works on suggestion and empathy, to move on to performative practice. The collective ritual with the flags of green spaces and rivers allows those who participate to identify with nature, to feel their belonging as living beings and to create a symbiotic relationship of mutualism with it. Marc Augé speaks of the work of art as a new beginning: the idea is that after taking part in a sort of initiation ritual, the present is no longer the same “, says Andreco, explaining that the people who participated in the Aula Verde were very impressed and how the sacredness returned to the place and at the moment of the action ensures that the work is taken care of over time and by more citizens. The participation of the community in the works of public art through citizen science put into practice during the analysis of the waters and the direct experience of the body involved in the performance, are part of that multidisciplinary language used by the artist also drawing on different techniques and which he has repeatedly claimed it as necessary to imagine possible and viable futures. The Flumen project, conceived as a format that can be exported and used by other groups of people with the help of Andreco, aims to raise awareness that climate change and the ongoing environmental crisis can be tackled without being overwhelmed by the the enormity of a problem that can lead to inaction, not renouncing to grasp its complexity as often happens, for example, in the numerous green washing operations implemented by large financial groups.

“As a researcher I have always been interested in moving from theory to practice, because I believe that the example is worth a thousand words. The green room is climate action; is the doing. People often feel lost in the face of the climate crisis: I believe instead that it is essential to show that through participation and starting from the bottom it is possible to take action “. 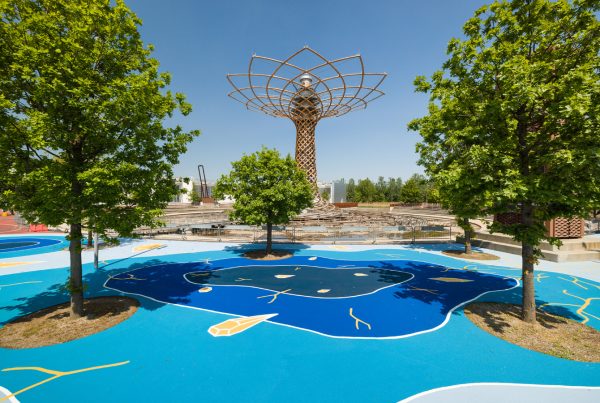 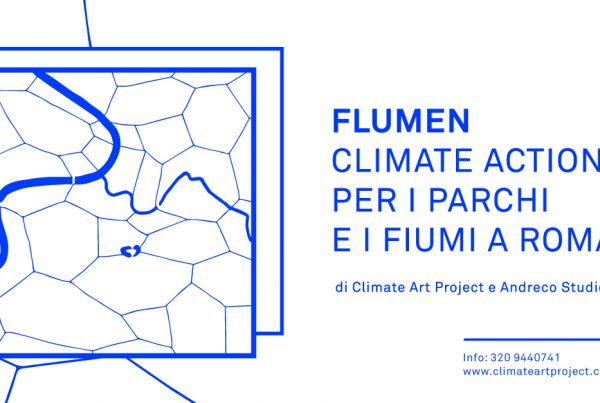 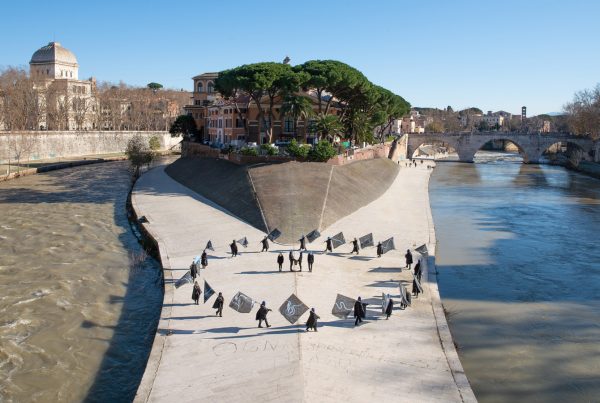