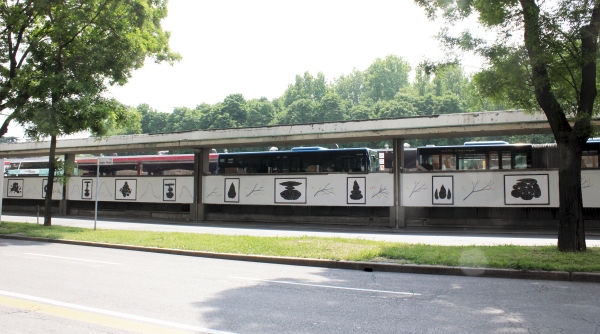 Andreco has carried out a site specific intervention with clear references to the main causes of anthropogenic pollution, on the boundary wall of the Bologna bus station, in one of the areas with the greatest vehicular traffic in the city.
Emissions – this is the title – is the second stage of Climate, the traveling macro project on climate change that Andreco inaugurated in Paris in conjunction with COP21, the last United Nations conference on the subject.
The Bologna project was carried out as part of the Cheap Festival which takes care of interventions on urban spaces that at the same time include disused wall surfaces and poster spaces.
Conceived with a narrative development that proceeds by symbols, the work evolves on two intersecting thematic strands, identifiable in the double binomial support / technique: on the one hand the painting on the wall, on the other the posters affixed on the billboards. </ p>

The mural should be read starting from viale Masini at the corner of via Capo di Lucca going in the direction of the train station. The first two blocks of the wall, marked by the supporting columns of the shelter, are occupied by an ascending nebula that refers to the pollutants present in the exhaust gases produced by vehicular traffic. In the third block, the focus is instead on the pollutants that generate the greenhouse effect. Subsequently, the focus shifts to pollution in the water cycle. In the following blocks, functions that refer to the percentage of CO2 in the atmosphere appear, the curves symbolically show the exceeding of the recommended limit to limit climate change of 350 ppm (parts per million) of CO2. Following other functions refer to the rise in temperatures, the functions become almost abstract designs and from these last a branch is born that progressively catches fire: the consequences of climate change in the design are expressed on the one hand in flooding and on the other in fires.

Parallel to the painting on the wall are the posters, on the first of which expands the nebula of exhaust gases that originates from the base of the wall. Its thickening proceeds in a crescendo billboard after billboard: from the fine powders (PM10) dispersed in the air to their precipitation on the earth, from the monolith up to gradually reaching the mountain and ending in a completely black poster.

With this mural Andreco once again tackles the theme of the relationship between man and nature, and using recent research on environmental sustainability and climate change, he reports with a subtle and never predictable language, a strong criticism of pollution anthropogenic generated due to the use of fossil fuels.

Bologna, the poster art of Cheap tells the pollution we live 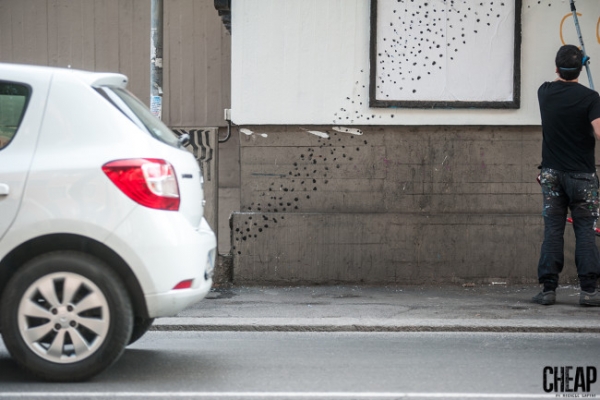 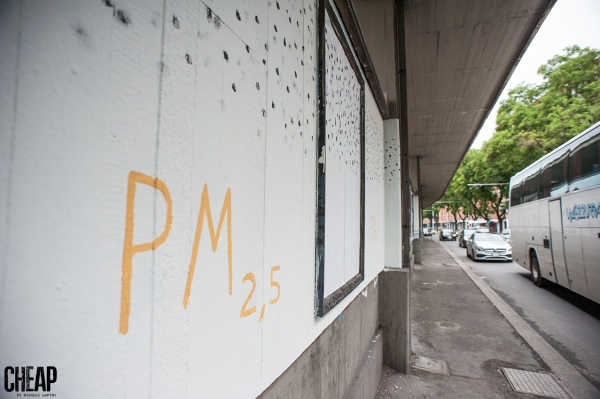 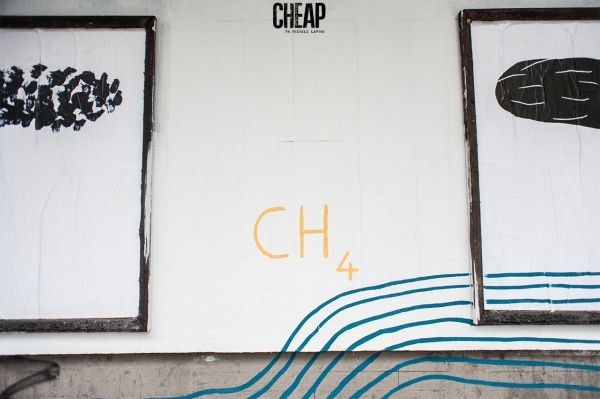 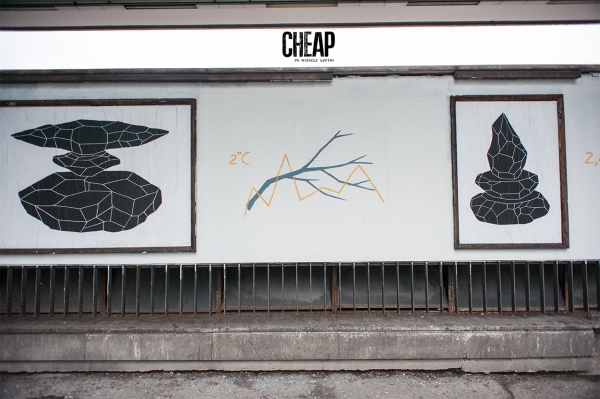 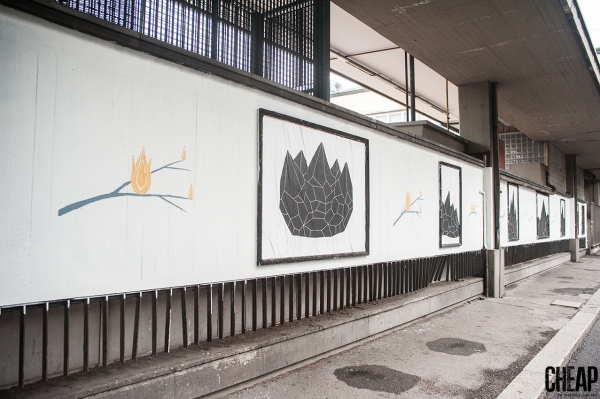 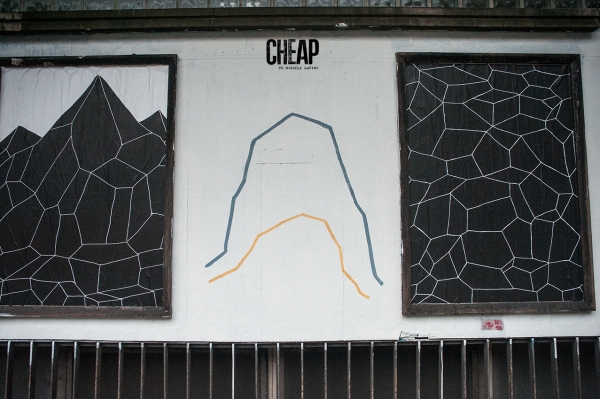 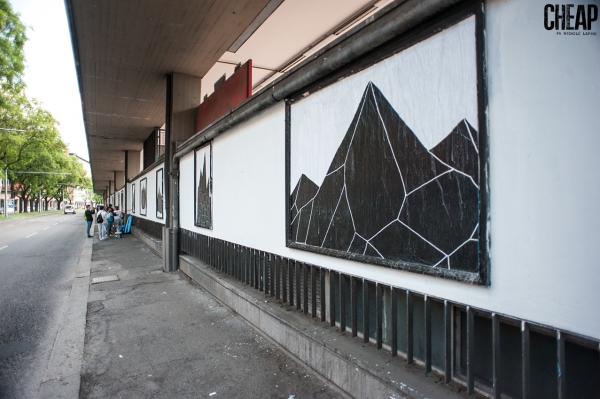 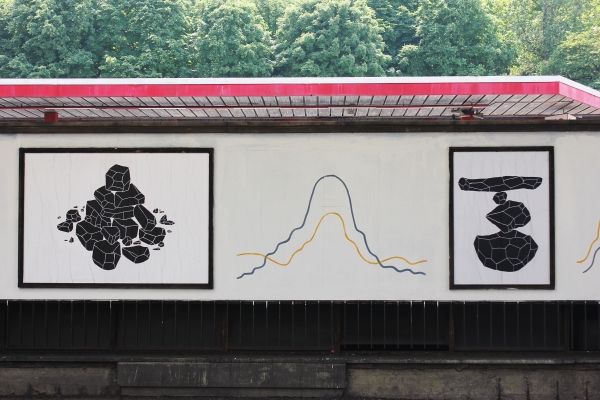 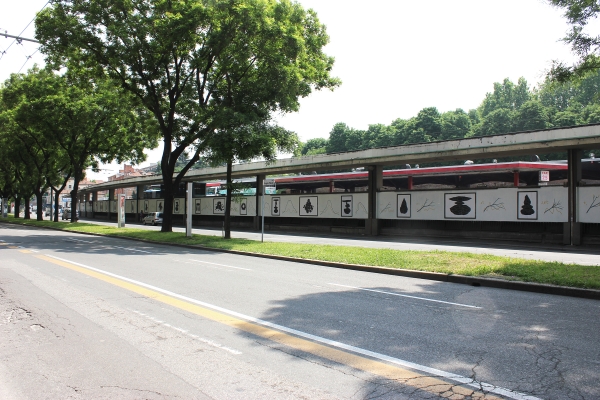